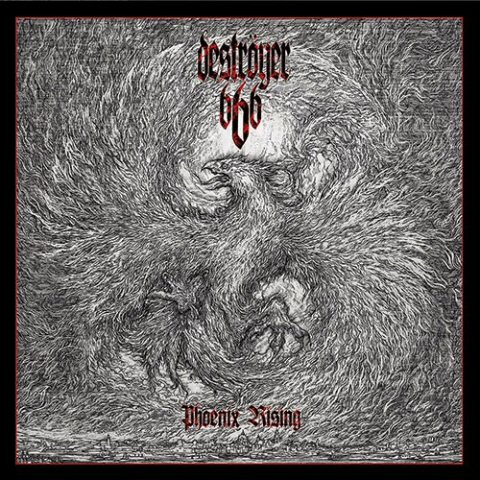 Destroyer 666 is probably the most popular extreme metal band coming from Down Under and rightfully so. They’ve released a couple of fine albums and EPs, always filled with quality Black Metal with some Death Metal influences. This album ‘Phoenix Rising’ has a real good production, not always the case with Black Metal. I especially like the Bass sound here, which really helps with the dark Black Metal atmosphere, more so then the guitars, which add quite a bit of the Death Metal feeling to the music. Sometimes the riffs, which are excellent by the way, sound a bit like a very fast and brutal version of some of the riffs on Dark Tranquillitys debut “Skydancer”. Not that you can compare these bands, but still. Drumming wise the album is filled with furious blast beats and sometimes some good double bass work. Whatever style the drums are, they’re always tight as hell. Favourites of me include ‘I Am The War God’, it’s a little bit epic, very brutal, has a bit of an Amon Amarth vibe to it, not a surprise because lyrically it could be from their hands. And the riffs are simply monstrous; machine gun blast beats and double bass are both present here. A real killer song. Next song “The Eternal Glory Of War” continues with these almighty technical riffs. This isn’t even a fast song compared to the rest of the album, but still not slows for sure! “Lone Wolf Winter” is blasting away from the start and has a real Black Metal sound to the guitar and a great atmosphere, while still being at hyperspeed sometimes. I tend to think that playing at hyperspeed isn’t always helping creating a dark Black atmosphere, not so with this song. You can also hear some great clear background vocals on this song, while the rest of the album is sung with a harsh, low pitched Black Metal scream, again sometimes with a Death growl feeling to it. In conclusion, an excellent album, not breaking any new grounds but tight as hell and superb riffs at times. Anybody who likes a good hateful Black Metal album should pick this up, as well as anybody who likes brutal Black with some melodic Death influences. But I warn you, it ain’t a peaceful album! And of course the atmosphere isn’t the same as on the Black Metal classics of the early 90’s, while both being brutal forms of Black Metal.

Track listing:
1. Rise Of The Predator
2. The Last Revelation
3. Phoenix Rising
4. I Am The Wargod (Ode To The Battle Slain)
5. The Eternal Glory Of War
6. Lone Wolf Winter
7. Ride The Solar Winds
8. The Birth Of Tragedy