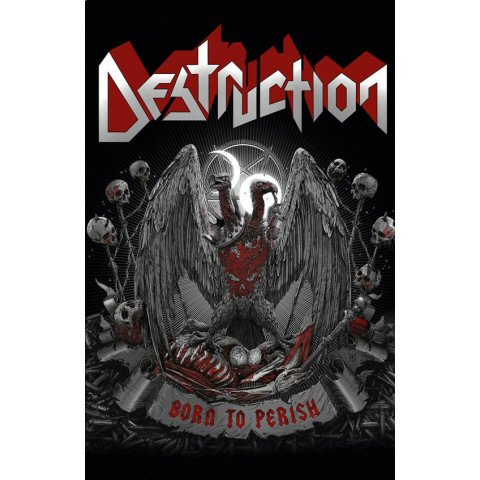 2019 has been a great year for thrash metal fans, with a multitude of releases hitting the virtual and physical shelves recently: Death Angel, Overkill, Flotsam and Jetsam, Exumer, Xentrix, Possessed… the list goes on and on, and another group of high calibre is Destruction and their record Born To Perish. Something that needs to be mention is that Destructiotn isnt a trio anymore: Swiss shred-master Damir Eskić was added to the line-up, and that in itself is something to draw your curiosity to check this album out. The album kicks off with no subtlety and no calm before the storm, with the band firing on all cylinders on the title track. Another addition to the line-up, Canadian drum animal Randy Black (of Annihilator and Primal Fear fame), wastes no time to show us his true colours on this traditional thrash number, which will definitely be a highlight of future tours. Razor-sharp guitars announce “Inspired by Death”, another bone-breaking number where Mike Sifringer displays his prowess on rhythm guitar and Schmier takes a diverse approach to vocals. With zero time to breathe, “Betrayal” kicks in with a familiar chord progression, and Randy Black again bringing his arsenal to the forefront. Damir rewards us with blistering solos on this track, and once again Schmier surprises us with several singing styles being layered on the chorus. Despite the recording of this album happened rather quickly – the band wanted to have an album ready before a tour with Overkill – the material doesn’t sound like it was hastily prepared. The German precision and effectiveness is in full effect here. Born tT Perish is immediately identifiable as a Destruction album, but with some experiments lurking, having lured them outside of the box. A great addition to their already impressive catalogue.