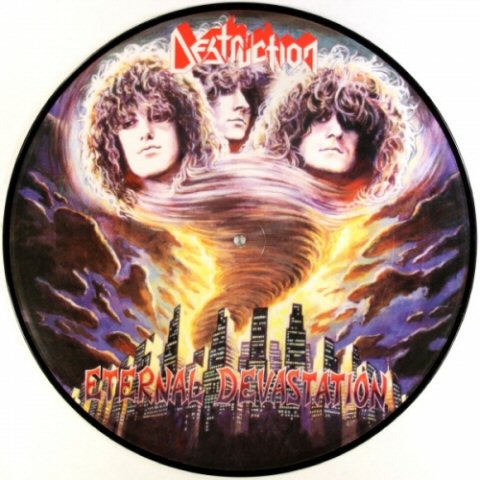 Destruction’s second full-length album, and last recorded by the original, “classic” threesome of vocalist/bassist Marcel “Schmier” Schirmer, guitarist Mike Sifringer, and drummer Tommy Sandmann, 1986’s Eternal Devastation may also be the defining release of their career. With its croaked and/or screeched vocals, buzzsaw guitars, and insistently basic drumming, the album joined early efforts by Kreator and Sodom in shaping the harsher, Teutonic thrash aesthetic adopted by most Euro-moshers in response to the genre’s original American invasion. And ironically, though they were never quite as popular as the other two members of Germanic thrash’s Big Three, Destruction’s sound was arguably the most accessible and “American”-like of all…well, just barely. Eternal Devastation bookends, “Curse the Gods” and “Confused Mind,” both prefaced their furious thrashing with classical guitar intros; more elaborate creations, “Confound Games” and “Life Without Sense,” boasted piles of stunning riffs; and scorching sprinters, “United by Hatred” and “Eternal Ban,” showcased fiery lead guitar licks from the talented Sifringer, and even the instrumental “Upcoming Devastation” never succumbed to boredom. In retrospect, the above were evidently setting the stage for Destruction’s transition into a two-guitar four-piece before the following year’s Mad Butcher EP, which fast-tracked their musical maturation, even as it compromised some of their grassroots credibility. Such is the double-edged sword of heavy metal; but it was inconsistency, not selling out, that wound up sullying Destruction’s overall legacy when all was said and done. And regardless of what came after, Eternal Devastation still holds up as an essential document of early European thrash.