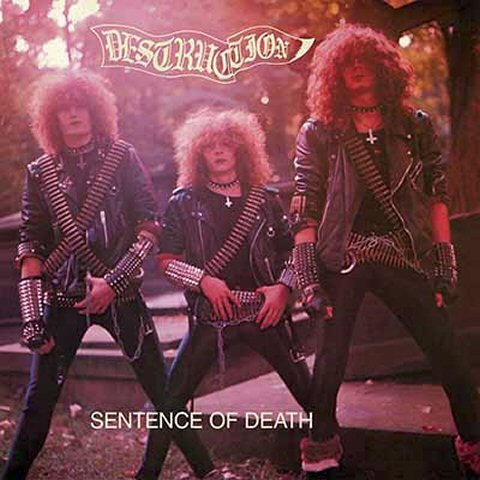 Mere months after Germany got its inaugural ass-kicking from the developing Sodom and their infectious debut EP, another entity came along and veritably rocked the scene all the way to its core. Eschewing the NWOBHM/Punk stylings and straightforward, street-riffing simplicity of their peers, Destruction instead prescribed to the serrated precision of the Bay Area brigade, taking Metallica and Slayer as gospel rather than Venom. The technical force of Sentence of Death is immediately evident, and must have been quite a statement at the time, literally a new banner for the Germans to fly, one that could stand toe to toe with anyone else out there, if not use its precise pugilism to beat them to a bloody, quivering pulp. Sentence of Death is a precision carving into the developing flesh of thrash metal, and stands as a ripping good listen nearly 30 years later, having lost little, if any, of its nasty, cutting charm. Destruction presented an interesting take on the acrobatic thrash riffing of their American cousins, whipping about the fret board in frenzy. Whereas Sodom chose a few punishing chords and constructed them into a few punishing riffs per song, Destruction’s method was much more clinical and evolved, piecing together long strings of sweet notation and slathering their violent riffing in an abundance of sweet solo’s. As far as I know, this put most other thrash of the period to shame, in terms of pure ability. At nineteen and a half minutes, this is almost exactly as long as its cohort in crime, In the Sign of Evil. Not long by any stretch, but the material here is densely packed and hungry for blood. Certainly, the content is much more menacing than the goofy cover image. Perhaps this looked cool to people at some point, but it only makes me laugh incredulously. It’s oddly endearing, though, like all those other things that are so overtly and unapologetically 80’s tend to be. Just look at that hair! Total Desaster (…desaster?) charges right ahead after a short intro, and while the riffing technique used was not exactly unique in a musical world where Kill em All was king, the vocals of Schmier certainly served to slap fans upside the face with this unique flavor. His psychotic, slimy, slur of a yell is not too unlike Angelripper in that it was much dirtier than the norm, but his higher pitch and wild inflections put a trademark stamp on their style. Black Mass kicks off with an excellent solo and slams through a smattering of semi-technical bravado that wouldn’t sound out of place on one of the better Megadeth records. Mad Butcher is still one of their most iconic songs, a driving and straight-to-the-point exhibition of delicate, evolving, razor-sharp riffing patterns that don’t shy from the minor frets… probably my favorite song on the record. Satan’s Vengeance and Devil’s Soldiers are also pretty hostile, the first a consistent fast-paced thrasher, while the second builds some atmosphere before letting loose it’s hectic, mildly blackened aggression. Not all the riffing is equally memorable, but it’s without fail pretty strong, and you won’t ever be bored for its short duration. For all the EP’s strengths, though, my socks still weren’t really knocked off. For whatever reason, early Destruction has never exerted complete dominion over my soul, a trait that extends to lots of classic thrash that many metal heads consider to be, well, classic. Not to infer that this is in any way lacking (though their ensuing full-lengths were a bit of a slog for me), but it’s just not perfection to my ears. As to why that is, I’d guess that as a young adult of today, it’s harder for me to appreciate and identify with material that may have rocked my world had I not grown up with unceasing brutality handed to me on a silver platter. For example, the natural impact of Left Hand Path is no doubt lessened when you’ve grown up listening to Behemoth. That said, I love some other classic metal from this time period much more, so whether or not it’s because of desensitization or just plain natural preference is not entirely clear. Perhaps both, to some degree. In any case, I wouldn’t say it’s perfect by any stretch, but Sentence of Death is cool both historically and based on its own merits, and I echo most praise for it, if not quite to the same degree of rabid fellatio. For 20 minutes, this is a lot of material, and it’s short enough to not overstay its welcome or stagnate in any way. It’s worth owning, and chances are if you’re an incorrigible thrash hound, you will find yourself much more smitten than I. Certainly all the young headbangers would do well to give this a go as well, if only for evolutionary knowledge of your chosen art form. Sentence of Death is a pretty ambitious start, but only a hint at the coming changes that Destruction would continue to exhibit, for better or worse. In a world-wide context, it’s perhaps not the most unique slab of thrash ever penned, but its impact on the German scene was, and is, immense. It’s also just damn good, slightly more fun than In the Sign of Evil even, and a nice bar set for both the band and the scene in general, instantly ingratiating themselves to the more technically-inclined thrashers of the world. With solid riffs, strong musicianship, and the drive to pull the elements into exciting cohesion, Destruction’s debut is a pretty forceful statement, one that stood at the crest of the coming tidal wave of German thashing excellence.