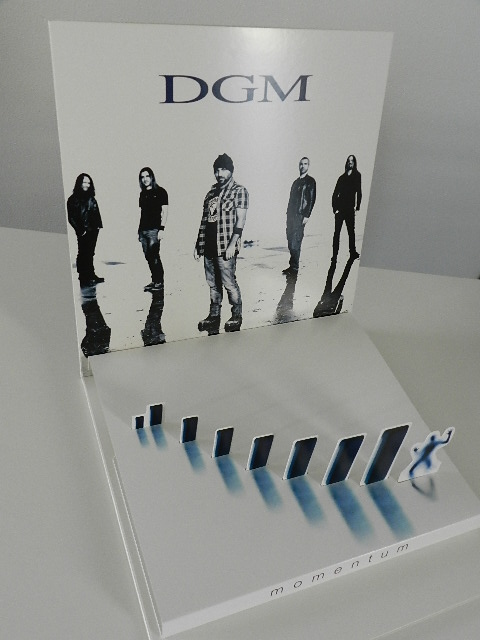 The eighth studio album from the act regarded as one of the best European Progressive Metal bands. Momentum represents the full stylistic maturity of a band now on top of its game, collecting 11 songs made of beautiful melodies, classy arrangements and top notch musicianship. To add an extra value to an already astonishing album, DGM have tapped legendary singer Russell Allen (Symphony X, Adrenaline Mob) to guest on the opening track Reason, and Norwegian guitar virtuoso Jorn Viggo Lofstad (Pagans Mind) to contribute with a solo on the track Chaos. Momentum was recorded, mixed and mastered by the band’s own guitarist and celebrated producer Simone Mularoni at Domination Studios in San Marino, Italy. If you’re a fan of progressive metal, huge melodies, incredible technical musicianship, and just basically awesome music, you MUST try DGM. Momentum is true to their sound. Composition is phenomenal, with sweeping choruses, technical passages, speed playing, big vocals, bombastic transitions. And the playing is simply remarkable. I cannot say enough about their technical prowess, but its never the focal point, which is what makes it even more impressive. The melodic construction is what makes the songs wail… the technical excellence is just along for the ride, and you don’t even notice the killer guitars, epic keyboards, or pounding drums, unless you listen for them. Its a feat that very few high performance bands can really pull off (Pagans Mind being another example). Most bands of this skill level put the shredding first, and the music second, which is what makes DGM so special. Mark Basile’s vocals are huge, bluesy, and relentless, and they confer a certain authority to the music. Its a presence that is unique to this band, and hard to describe. Every lover of Symphony X, Kamelot, Dream Theater and such MUST listen to this album… it is that good. Just phenomenal……