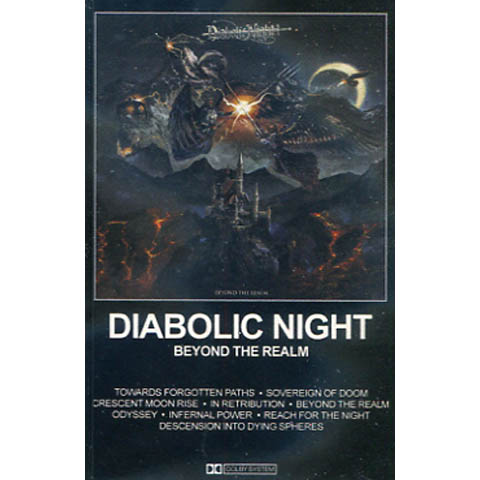 Conceived in 2013 as a solo project, Diabolic Night a.k.a. multi-instrumentalist, composer and singer Heavy Steeler has made considerable inroads in the broader metal scene with just one demo, 7-inch and mini LP. Beyond The Realm is the first full-length from the reclusive musician and stands testament to the fact that dark-coated thrash stays rust-resistant if forged with strength and style. As such, the album offers an idiosyncratic blend on a traditional base, leaning towards ageless hard rock, NwoBHM flamboyancy and early 90s blackness at different times, thus truly going “beyond the realm” of bullet belts, studs and leather. In fact, both cover art and title refer back to a lyric line from 2015’s single “Infernal Power” as expressions of the never-ending battle between good and evil as a conceptual leitmotif. Recorded in no less than three studios with the help of Nuctemeron’s Christhunter on drums, crowned with a mix by engineering veteran Mario Scarpari and mastered by Patrick W. Engel at Temple of Disharmony, “Beyond the Realm” is very much an album in the original sense of the word, meant to be grasped as a whole from the punishing pummel of ‘Towards Forgotten Paths’ on to it’s intensely atmospheric finale ‘Descension Into Dying Spheres.’