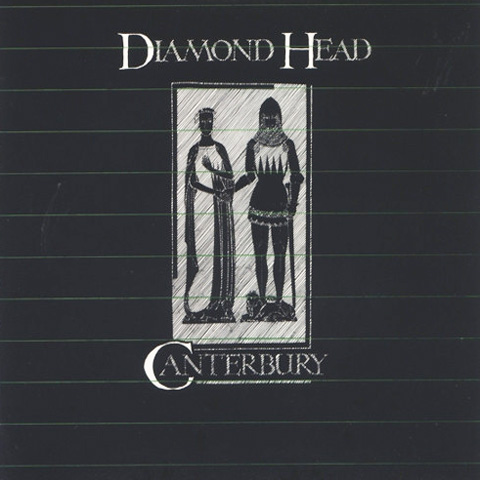 Original Scandinavian pressing with Rights Society NCB on the label

Diamond Head is undoubtedly one of the most important names in the history of the New Wave of British Heavy Metal movement. Put next to giants like Iron Maiden and Saxon, the band’s music is a constant inspiration to various modern acts – Megadeth’s Dave Mustaine along with Metallica’s James Hetfield and Lars Urlich often mentioned Diamond Head as one of their most important influences in the entire music business. The group’s albums to this day impress NWOBHM enthusiasts and gather new fans, delivering all the best features of ambitious heavy metal music one could desire. Their third album Canterbury was released in 1983 and the album saw a drastic style-change, as the band decided not to limit themselves to the heavy metal genre and incorporated many hard rock ideas into the record. The album includes some top quality song writing, and its not to be scoffed at. Clearly the remaining partnership of Sean Harris and Brian Tatler had not suffered from the untimely departure of fellow founding members Colin Kimberly and Duncan Scott. However some of the songs featured on the album had been written some time before 1983. The best of these include the quirky Out of Phase, followed later by the hauntingly masterful To the Devil his Due, the album also includes the two epic tracks The Kingmaker and Cantebury. These two tracks are drawing on medieval history for lyrical inspirational, they pioneered the use of synthesized brass. They both have substance, although The Kingmaker especially is uneasily positioned between two of the more accessible numbers, making it sound all the more preposterous. This album is probably the most under-appreciated of any that came out of the NWOBHM movement. The song writing transcends the boundaries of simple blues based heavy metal, drawing on a wealth of outside influences. It is a flawed masterpiece that found itself overshadowed by the epic majesty of Piece of Mind, which eclipsed it both in terms of consistency and sheer popularity. Nevertheless I would still call Cantebury an unfairly underrated album from that year but as a pure metal album it fails to deliver the necessary punch.