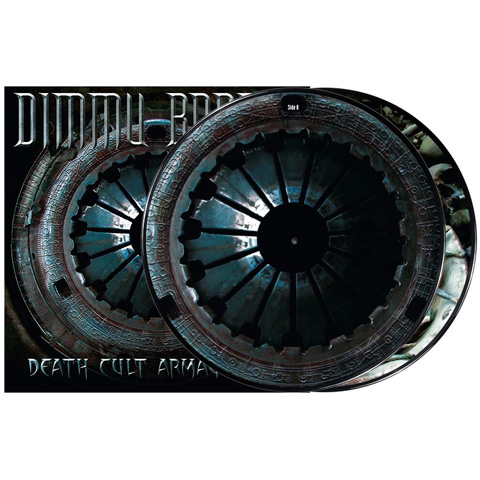 Purists may bristle at the notion, but by 2003, Dimmu Borgir had become the ultimate neo-black metal band. With Mayhem and Enslaved exploring the tattered ends of avant-garde experimentation, Emperor and Immortal broken up, Darkthrone still clattering away in the garage, and Cradle of Filth underwhelming everyone with their too-dense-for-its-own-good major-label debut, Damnation and a Day, Dimmu Borgir unleashed the stunningly impressive Death Cult Armageddon. The CD booklet boasts an artist’s rendering of a twisted metal machination surrounded by a sea of skulls and bones, which is a perfect analogy for the trajectory of Dimmu’s musical vision — immense, strange, and jutting in all directions, an imposing and powerful monstrosity that’s the concoction of a few brilliantly twisted minds. In fact, Death Cult may be the closest-to-perfect amalgamation of the hallowed genres of black, death, thrash, gothic/industrial, and symphonic metal — heavy on the symphonic, because here the bullet-belted, corpse-painted Norwegians collaborate with the Prague Philharmonic Orchestra and reap the benefits with savage glee. The orchestra lends overwhelming and full-bodied sonic bombast to “Vredsbyrd,” “Eradication Instincts Defined,” and “Progenies of the Great Apocalypse,” the latter two so vast and epic in scope they seem to spot weld John Williams/Star Wars compositional soundtrack drama to blastbeating black metal nastiness — and while naysayers claim strings make metal wimpy, here they’re seamlessly integrated and lend power and profundity to the arrangements. Elsewhere, Dimmu’s songwriting is firing on all cylinders, and there’s nary a microsecond of filler on the whole album: the neck-snapping thrash of “Lepers Among Us” and “Cataclysm Children”; the clanging industrial samples and submerged-in-petroleum vocal effects of “Unorthodox Manifesto”; the off-kilter vocal gnashing and tumbling piano during the verses of “Blood Hunger Doctrine.” While most stood in awe of Dimmu’s previous album, Puritanical Euphoric Misanthropia, because of its stellar lineup — vocalist Shagrath, guitarists Silenoz and Galder, bassist/vocalist Vortex, drummer Nicholas Barker, and keyboardist Mustis — Death Cult Armageddon finds more songwriting credits belonging to Mustis, who lends his hands to the symphony-heavy tracks and may be the band’s holy-hell hand grenade hidden among the cloaking personalities of his bandmates. Add in two wonderfully blood-retching “duets” between Shagrath and former Immortal croaker Abbath — on “Progenies…” and album-closer “Heavenly Perverse” — and the record represents the most precise, calculated, and consistently devastating sound and fury to emerge from the metal underground in the early 2000s (where it belongs next to Immortal’s Sons of Northern Darkness and Emperor’s Prometheus in the hellish hall of fame). Death Cult Armageddon finds Dimmu Borgir gloriously fulfilling the potential exuded on Puritanical Euphoric Misanthropia and breakthrough release Enthrone Darkness Triumphant, and officially staking claim to the heap of bones and armor known as the Scandinavian black metal scene.