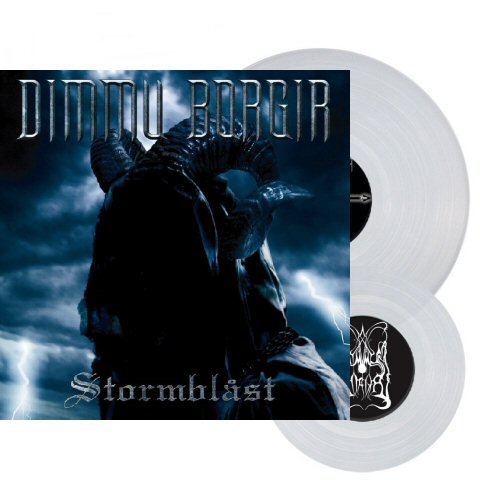 Stormblast, Dimmu Borgir’s second full-length album, has all the makings of a future first-tier black metal outfit finding its footing in the misty, cragged mountains of Norway. However, unlike most of its Scandinavian accomplices, Dimmu’s sound got progressively more aggressive as its career advanced, making Stormblast a relatively tame entry in its catalog. Still, the band’s youthful exuberance would have benefited from a more punchy production; the flat, faceless mix relegates indiscriminately buzzing guitars to the background while keyboards wash over the arrangements — a big no-no in metal circles, where even crudely recorded albums push guitar grind to the forefront. Lengthy, melancholy piano instrumentals, too many mid-paced tempos, and an overabundance of goth-flavored synth mush will test the patience of those looking for a more visceral approach (and the Norwegian-language lyrics will leave a lot of listeners looking for an emotional peg, although “Antikrist” isn’t tough to translate); the record just doesn’t cut it when compared to more influential mid-’90s black metal recordings, especially Emperor’s In the Nightside Eclipse, Immortal’s Battles in the North, and Cradle of Filth’s Vempire EP. Stormblast may be an inordinately rocky peak with few handholds, but it’s still a worthy climb for black metal historians, if only to compare and contrast Dimmu Borgir’s embryonic state prior to the sonic overhaul that came with its benchmark album, the grand, irrepressible Enthrone Darkness Triumphant.