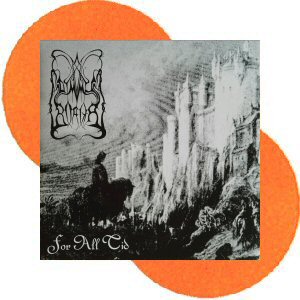 Laying down the blueprint for their own career as well as the careers of countless imitators, For All Tid is one of the landmarks of the Scandinavian black metal scene. Although several other artists had already planted the seeds for the neo-opera approach to the genre, this was one of the few recordings that displayed the potential the genre had to grow. The production is awful, boasting thin and sharp guitars, muted drumming, and echoing vocals that sound like what it might have been like to stand outside of their rehearsal hall. But somehow the songs manage to overcome the production, offering a somewhat beautiful (albeit warped) view of heavy metal that comes off far more ambitious than a band in their position usually does. The scope of the album is quite large, offering lush soundscapes of grating metal offset by sweeping keyboards. The use of clear vocals was another somewhat new innovation in the genre, and their appearance in “Over Bleknede Blåner Cil Dommedag” is an excellent way to combine that idea with the savage thrash also contained in the song. Although Mayhem and Emperor would bring this approach to the international metal scene a year later with fantastic albums, For All Tid is the last stepping stone those groups needed to make it there. On top of that, this also marked the debut of one of the brightest and most innovative metal bands of the following decade.