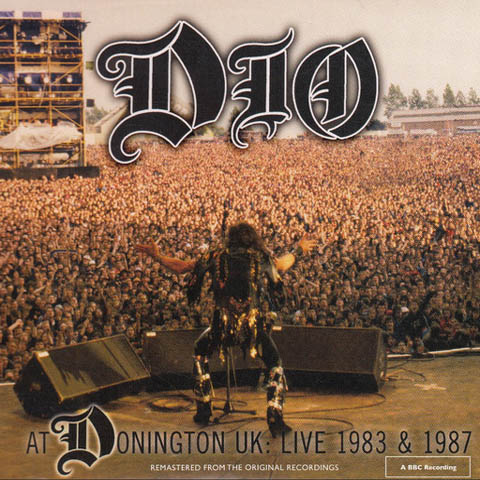 Two good live albums and one remarkable legend what’s more to ask? Dio had quite a unique voice, it was operatic, powerful and quite impressive and unlike some singers he had this great voice right until his death. It’s hard to describe just what Dio was and represented, he was a kind and generous man who cared about his fans, the metal movement and his music. He gave a lot to metal including the famous ‘Devil Horns’ and to say that he was a huge influence on this genre of music would be an understatement. Ronnie was a man of great talent and was truly the voice of metal (at least one of the most important and powerful ones), he left us excellent music from his solo career and all the bands he’s been in. This recording from Monsters Of Rock at Donington UK in 1983 is a testament of not only his talent but of just how passionate he was about music. This was the first time ever Dio played in the Uk and his debut show just happened to be at the legendary Monsters Of Rock festival. The line-up for this disc is: Dio (vocals), Vivian Campbell (guitars), Jimmy Bain (bass), Vinny Appice (drums) and Claude Schnell (keyboards), this often considered the best era of the band and rightfully so. Children of the Sea is fantastic, Dio’s delivery of the song is wonderful. Straight Trough The Heart is impressive, the long version of Heaven & Hell is great and Holy Diver is amazing, this is a terrific live version.

The recording from Monsters Of Rock at Donington UK in 1987 is a testament of not only his talent but of just how passionate he was about music. 1987 was Dio’s second appearance at the Monsters Of Rock festival. Dio was out on this ‘Dream Evil’ tour. The line-up during this tour and on this cd is Dio (vocals), Craig Goldy (guitars), Jimmy Bain (bass), Vinny Appice (drums) and Claude Schnell (keyboards). One of the highlights is actually the short version of Children of the Sea that leads into Holy Diver and then going into Heaven And Hell.