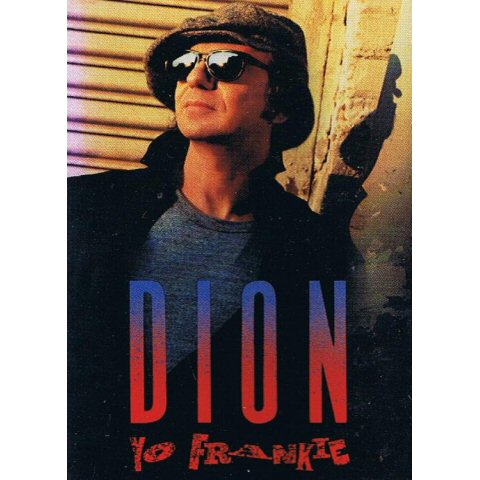 Despite having written some beautiful songs, Dion’s great creative strength has always been as an interpreter and, in that regard, especially as an adapter and assimilator of musical genres. Beginning with his early rock & roll sides, which had the polish of classical recordings, and into the early ’60s, when he took a moderately successful pair of early Drifters R&B numbers, “Ruby Baby” and “Drip Drop,” and transformed them into white rock & roll without violating their spirit (and making million-sellers out of each in the bargain), he was always intermixing styles, approaches, and sounds into something of his own. Yo Frankie, released after his induction into the Rock and Roll Hall of Fame, was Dion’s most contemporary effort up to that time, and one that stood securely with its feet in both the ’80s and the ’50s. Producer Dave Edmunds took an approach here similar to what Jeff Lynne did with George Harrison and the Traveling Wilburys, giving the music a very full sound without going overboard, and never losing sight of the singer at the centre of it all. Dion also plays rhythm guitar alongside Edmunds (on lead) and Bryan Adams (who also sings, along with Lou Reed, Patty Smyth, and Paul Simon) on these sides, but mostly the focus is on his voice and on lyrics about romance, the streets of the Bronx, and generally a past worth revealing in. Some of the mixes of sound are interesting on their own terms — “I’ve Got to Get to You” bears a faint resemblance to “Every Breath You Take,” while “Yo Frankie” threatens to turn into “Ruby Baby” or “The Wanderer,” without ever lulling listeners with the similarities. “Written on the Subway Wall/Little Star” is the most urgent song here, an observation about urban life then and now on which Paul Simon (himself a veteran of late-’50s rock & roll much like Dion) turns in a beautiful performance on backing vocals. And “Always in the Rain” is a poignant contemporary personal message, based on his contact with a girl at a drug treatment centre. The album fits together so well and coherently that the contemporary and the nostalgic elements merge seamlessly into a pleasing whole, as valid a statement from Dion in 1989 as “Runaround Sue” or “Donna the Prima Donna” had been 30 years earlier.

Track list:
1. King Of The New York Streets-with Lou Reed
2. And The Night Stood Still-with Mark Lennon
3. Yo Frankie (She’s All Right With Me)
4. I’ve Got To Get You
5. Written On The Subway Wall / Little Star-with Paul Simon
6. Drive All Night-with Bryan Adams and K.D. Lang
7. Always In The Rain
8. Loving You Is Killing Me
9. Tower Of Love
10. Serenade-with Dave Edmunds