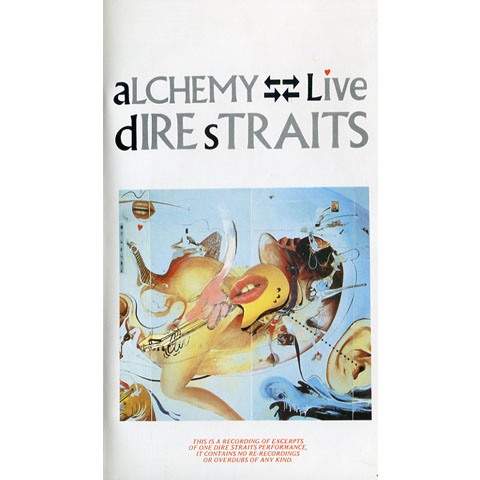 Taken from the band’s Love Over Gold tour, this vhs captures Dire Straits just months before international superstardom was thrust on them through the success of Brothers In Arms. The set featured the cream of the four previous albums, as well as the B-side to “Twisting By the Pool,” “Two Younger Lovers.” Strangely, all the tracks are played in a profoundly Love Over Gold style; that is, long and drawn-out songs, incomprehensibly extended guitar solos, obligatory fast and slow sections, and an extremely serious, yet mysterious mood. Mark Knopfler and new recruit Terry Williams steal the show through their highly impressive guitar and drum playing, respectively. The classic “Sultans Of Swing” guitar solo, the highpoint of this live recording, was never better performed than on Alchemy, while Williams proves himself capable by his amazingly fast and always interesting drumming. If one can bear to watch rhythm guitarist Hal Lindes dance around in his pink ’80s leggings for 90 minutes, and Alan Clark add too much synth to songs not needing any, a superb concert can be seen in Alchemy. The fine track list and musically impressive band make for what is one of the best live releases from the decade.