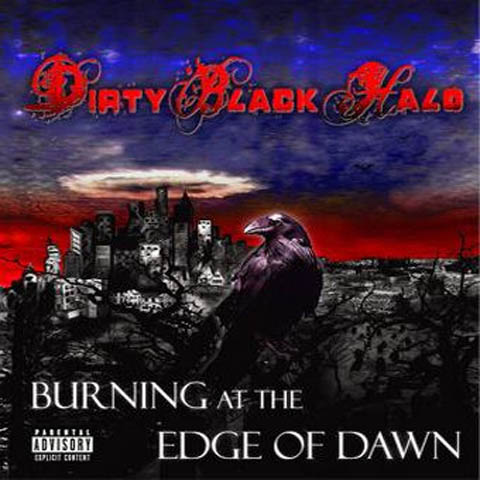 Dirty Black Halo ‎–Burning At The Edge Of Dawn cd

Dirty Black Halo is a hard rock band from Tampa, Florida. The band was formed in 2005 by guitarist Jerry d’Paoli and lead vocalist John Hale after deciding to create a musical project focusing on original material. Dirty Black Halo self-released their first album, Thanks For The Tragedy in 2008, they took their stage show to the public opening up for Skid Row, Ace Frehley, Metal Church, and other notable acts. Joe Davison of Pop Gun Pictures approached Dirty Black Halo to contribute to the soundtrack of his upcoming film, Experiment 7. Several songs from Thanks for the Tragedy were used throughout the film. 2012 saw the release of their second release, Burning At The Edge Of Dawn. The band aimed to compose an album that would fuse the raw rock sound of their previous album into a heavier production. Wanting to push the envelope and delve into darker waters. Shortly into the demoing process, the band was approached by Joe Davison once again to contribute a track to his upcoming horror film, As Night Falls. Instead of presenting a completed song or a work-in-progress, Dirty Black Halo decided on writing a theme-specific track for the movie which, subsequently, also ended up on the album. After the release the band was chosen to open up for artists such as Ozzy Osbourne, Slash, Rammstein, Bang Tango and Adler’s Appetite. Burning At The Edge Of Dawn is a modern day cross between Motley Crue and Faster Pussycat with a new hard rock feel.