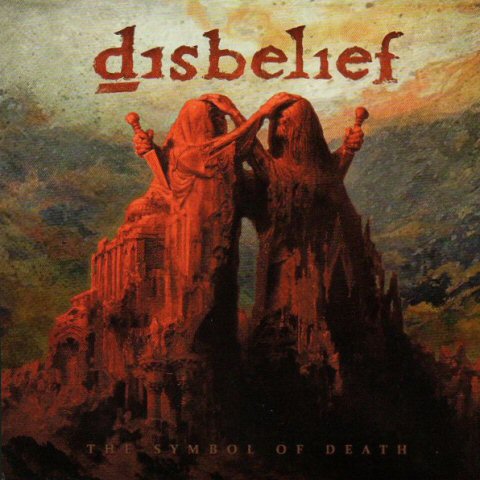 PROMOTIONAL ONLY means issued by record company in very limited quantity and sent to selected industry professionals ONLY for promotional consideration/airplay. Never for sale and highly collectable releases

Formed in 1990, Disbelief is a Gross-Umstadt, Germany-based death metal group. The quintets tenth full-length studio album, The Symbol Of Death, was released in 2017. The album contains 13 brutal death metal tracks. Imagine yourself being crushed by a throng of stomping giant elephants, this is how it feels when listening to Disbelief’s massive, torturous, bombastic war-like death metal sound. The full throttle is on and it feels like a sonic assault on your ears. It is heavy, brutal and uncompromising with a hell of a groove. The Symbol Of Death proves to be a monster, first guttural signature vocals, precise and bloodthirsty double bass drums, backed up by a colossal wall of thickly produced face-melting guitars. Lyrically speaking, the track “Rest In Peace” deals with the death of the father of vocalist Karsten Jäger from cancer, while the song “One By One” is dedicated to Nazi-hunter Simon Wiesenthal. The overall production is heavy, groovy, crispy and just as a piece of decent death metal should sound anno 2017. The beautiful cover artwork duties fell to Eliran Kantor (Testament, Soulfly….). The cover artwork shows two statues blessing each other, and betraying and stabbing each other in the back with the other hand at the same time, a hypocritical blessing. There is definitely something to The Symbol of Death that makes me pleased. Especially recommended for fans of Obituary, Death, Atheist Joke etc. However comparisons and descriptions are not proper here because Disbelief have its own recognizable sound that has been around for more than 25 years.