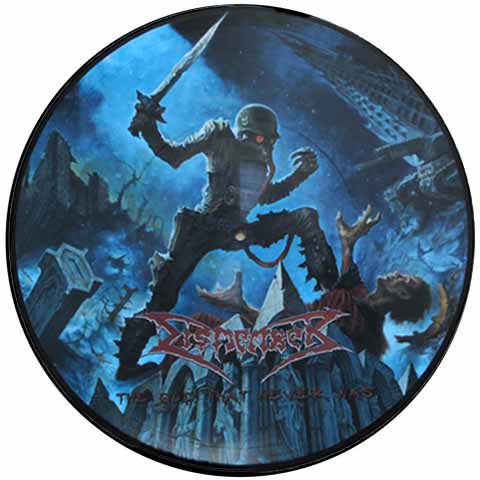 Dismember -The God That Never Was pic disc

Eighteenth anniversary are two words that, back in 1988, probably never entered the minds of either the Swedish moshers who comprised Dismember’s original line-up or their early fans in Stockholm. Back then, death metal was a new kid on the headbanger block — and it was a bad, unruly, nasty, disturbing kid who was loud and obnoxious even by metal standards. The kind of kid who seems destined to live fast, self-destruct, die young, and leave a not-so-pretty corpse behind — not someone who will still be going strong 18 years down the line. But death metal endured, and Dismember celebrated their 18th anniversary with the release of The God That Never Was in 2006 (although technically, it’s a 17th anniversary celebration because the album was recorded during the summer/early autumn of 2005). This is not a band that has become more congenial with time or a band that “had to grow up eventually”; providing death metal that is very mindful of thrash, Dismember is still blistering after 18 years — and they aren’t apologetic about it. If there is anything “grown up” about The God That Never Was, it is the musicianship; the moshers in this Dismember line-up definitely have chops, which is an important point because — face it — there are plenty of young rockers these days who can’t play their instruments and haven’t spent enough time in what jazz musicians call “the shed.” The God That Never Was reminds you that being loud, fast, and abrasive doesn’t have to mean being sloppy — and while this 35-minute album doesn’t take Dismember into any new or uncharted territory, it is a decent, if predictable, effort that is played with conviction and underscores the longevity of these Nordic death metal veterans.

Track listing:
1. The God That Never Was
2. Shadows Of The Mutilated
3. Time Heals Nothing
4. Autopsy
5. Never Forget, Never Forgive
6. Trail Of The Dead
7. Phantoms (Of The Oath)
8. Into The Temple Of Humilliation
9. Blood For Paradise
10. Feel The Darkness
11. Where No Ghost Is Holy