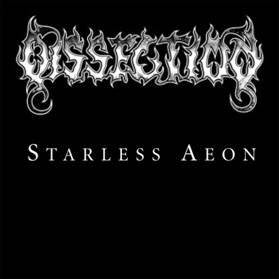 Us only mini album. Limited 1000 copies

Dissections Reinlaos was an album that were popular to bash and slash when it came out. I however would say that this is a masterpiece of blackened heavy metal. One can notice the reasons of the hate towards Reinkaos, since a lot of black metal (and extreme metal in general) fans are a bunch of fifth rate norsecore worshipers without a proper metal background, which leads them to despise the album and call it boring and In Flames influenced because it’s not filled with blast-beats, and it has a clean production and Iron Maiden influenced leads. Absolutely clueless and ridiculous arguments. The songwriting is pure class. Lots of killer riffs and amazing solos. Not in vain Jon spent years in the songwriting process. Just listen to the rabid and Maiden-ish riffs in Starless Aeon, absolutely killer. The first riff is heavy, with a great melodic lead over top of it, which leads perfectly into the verse, with Jon absolutely spitting the lyrics. The chorus containing the esoteric formulae is almost epic. It has a powerful mix of Jon and Set Teitans guitars. It should also be said that Jon stated, well in advance, that Reinkaos would be more direct and to the point. This has something to do with the lyrical content. Being that the lyrics were intended to be actual invocations and evocations, one would assume that simpler structures would be appropriate. And indeed, there’s a lot of magic(k) to be found in the lyrics. Perhaps that’s why this record polarizes people so severely. It seems that people who are, at least, appreciative of the occult/satanism, find redeeming value in Reinkaos while those who are simply looking for a Dissection record tend to feel left out in the cold. In any event, Jon acheived his goal of creating a truly Satanic record. And apparently he was so pleased with the result, that he chose to end his earthly existence after its creation…Feeling that he had brought Dissection to its logical conclusion and with it, his life’s work. The Starless Aeon single was only released in the States