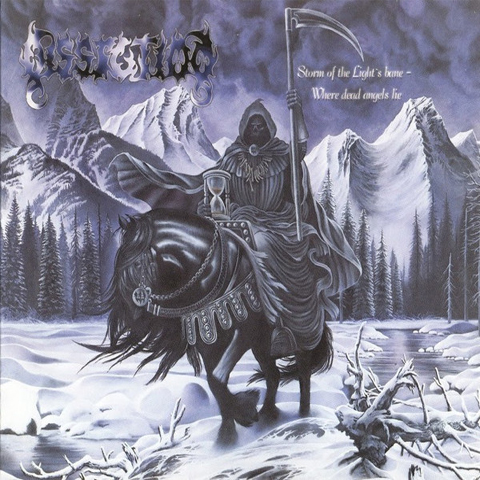 Reduced price due to cover being ex

On their final full-length album, Dissection further refines their brand of icy black/death metal with impressive and frightening results. The guitars, with their gloomy minor-key riffs and intentionally blurred tones, feel like a cold wind on the permafrost. The drums are speedy, intricate, and precise, while frontman Jon Nodtveidt’s vocals — delivered in an evil, mid-range rasp — top off what amounts to just a nightmarishly dark sound. To put it another way, very few bands could get away with an album cover that depicts the grim reaper riding across the snow on a black horse while holding a scythe and an hourglass; Dissection is one of them. The songs themselves (six of them, excluding the guitars-only intro and the pseudo-classical piano outro) are all expertly crafted mini-epics. There is a strong sense of thematic unity tying each song’s various riffs and sections together, and the soaring, darkly majestic guitar melodies are consistently memorable. Sure, there is a little bit of melodrama here, but Dissection is most certainly on top of their game, and Storm of the Light’s Bane is deservedly hailed as a landmark in the melodic black/death metal genre.