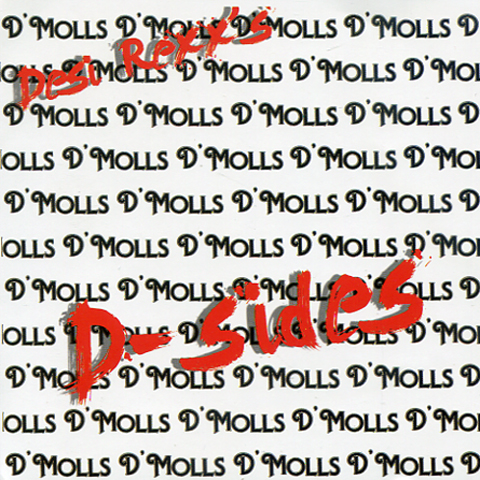 Ex-Atlantic Records recording artist D’Molls returned in 2011 with a new album under the moniker of Desi Rexx’s D’Molls. This however is far from a new album but a collection of b-sides, rare tunes and unreleased material. The 18 track album takes the listener on a wild (pre-seat belt) roller-coaster ride through some classic D’Molls tunes and then down around the bend with some tracks that will delight, surprise, and titilate. The one constant throughout is the mesmerizing and catchy blues rock vocals of lead singer Desi Rexx – the same vocal stylings that have made D’Molla a cult favorite straight out of the Midwest hard rock scene. D-sides features some notable talent from the hard rock world including Andy Parker of UFO, Chip Znuff of Enuff Znuff, Mick Sweda of the Bulletboys, Bobby Barth of Axe, John Thomas of the Lita Ford band, P.J. Smith of No Sweat, and Danny Johnson who has played with Alice Cooper, Rod Stewart, Derringer, Steppenwolf and Axis. The album opens with a toe-tapping, finger snapping bluesy ditty entitled Snazzy Shoes that could easily have been a bonus track for either of the two Atlantic Records albums. Without missing a beat the album soars into a handful of rockers starting with M-O-N-E-Y featuring Bobby Barth from the band Axe. The following 3 tracks (All I Want, HI ‘n’ LO, Crimes Of Fashion) are the original 3 song demo sessions that got the band signed to Atlantic Records back in 1987. The remainder of the album features fun and collectible rarities and rockers, and even a ballad or two for all of you slow dancers. From his Glam-O-Rama days with St. Valentine and D’Molls, through his whirlwind ride as guitarist for David Lee Roth, down to his Still on tour doin what I love doin second best present, Desi has remained the consummate entertainer both live and in the studio. Someone recently asked him why he never slows down. Desi (never at a loss for words) answered, Y’know, most music usually makes things a little better. My music always makes everything a lot better! People smile and forget their troubles for awhile. It’s like Shake ‘n’ Bake. . . and I helped!. In these uncertain economic times, one thing is certain: There is no better value for your hard rock dollar than to get yourself a copy of this particular album