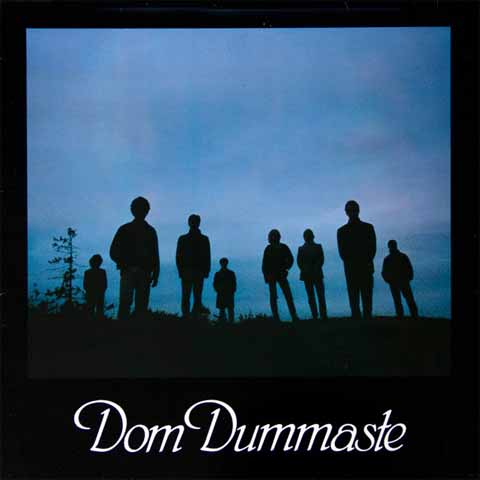 Reduced price due to cover and vinyl being ex-

Dom Dummaste is a Swedish experimental band, veering wildly between hard electronics, raw rock, and mild ballads, sometimes within the same song. They were formed in 1979 around the core of Martin Rössel and Lars Cleveman and they took their name, literally “the dumbest ones”, from a Swedish translation of Iggy Pop’s Dum Dum Boys. Martin Rössel is know in Sweden for his solo albums while Lars Cleveman is a well known opera singer. They debuted under the name of Lars Cleveman, Martin Rössel And Dom Dummaste with a cassette tape in 1980. Two years later saw the release of their debut album Sympati För Djävulen (the name a travesty of Rolling Stones Sympathy For The Devil). They album was recorded April to September in 1982 at MNW Studio, and the music can is a relatively diffuse mixture of post-punk and hard guitar rock, with strongly theatrical lyrics. Cleveman and Rössel were at this stage joined by drummer Anders Hernestam (from Weeping Willows, Commando M.Pigg, Ståålfågel and Stefan Sundström), Carl Hilborn, Ralf Nygård, Nils Personne (who have recorded with Stefan Sundström and Lars Demian), Olle Schedin and Henrik Stawe.