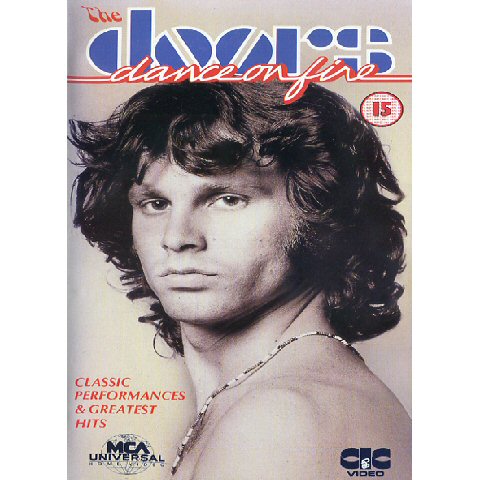 The Doors -Dance On Fire vhs

The Doors was all about Jim Morrison; it was his throaty voice, a strange grace which was rather like a newborn colt, and his charismatic talent that carried the group to fame, despite the able and sometimes brilliant musicianship of Ray Manzarek (keyboards), Robby Krieger (guitar). and John Densmore (drums). If you love The Doors than this video is an absolute must for your collection. This one includes most, if not all, of their television appearances including the live performances of “Light My Fire” and “People Are Strange” from the Ed Sullivan Show in 1967. One of my favorite performances is when Jim and the band perform “Love Me Two Times” in black and white from a TV program in Denmark. I really like this performance of the song because in this one Jim mixes the poem of “Texas Radio and The Big Beat” in the middle of the song and it sounds really cool. Another song that I love is “Touch Me” from the Smothers Brothers Comedy Hour. In this performance the band perform the song with a full orchestra, it sounds very nice. The End is a song that is shown in full and is focused on Morrison and was filmed at a 68 Hollywood Bowl concert. In this piece, as well as the other clips, he seems to be in a total chemical haze, a poster child for substance abuse…rather like a young and very beautiful Ozzy, and it is rather sad to watch. This is good for a trip down memory lane for those who were young in the late ’60s. As i said, you will love this video if you’re a Doors fan and even if you aren’t one after seeing this great video you will become one.