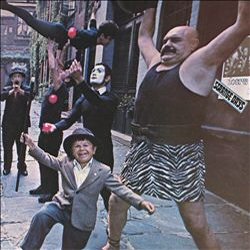 Strange Days is the second album released by American rock band The Doors. The album was a commercial success, earning a gold record and reaching No. 3 on the Billboard 200 albums chart. Despite this, the album’s producer, Paul Rothchild, considered it a commercial failure, even if it was an artistic triumph: “We all thought it was the best album. Significantly, it was also the one with the weakest sales. We were confident it was going to be bigger than anything The Beatles had done. But, there was no single. The record died on us.” Nonetheless, the album managed two Top 30 hits, a Top 3 placing on the US charts, and a platinum certification. Furthermore, the album certainly did nothing to derail the overall success of The Doors, as demonstrated the next year by their chart-topping follow-up Waiting for the Sun. Strange Days consists of songs that were written in 1965-1966, but did not make it onto their debut album, such as “Moonlight Drive”, which was one of the first songs written by Jim Morrison. The song was recorded in 1965 (demo) and 1966 (intended for their first album). In 1967 a final version was recorded and released on this album. Strange Days contains some of The Doors’ most psychedelic songs. It includes songs such as “Strange Days”, “People Are Strange”, “Love Me Two Times” and “When the Music’s Over”.

Track listing:
1. Strange Days
2. Youre Lost Little Girl
3. Love Me Two Times
4. Unhappy Girl
5. Horse Latitudes
6. Moonlight Drive
7. People Are Strange
8. My Eyes Have Seen You
9. I Cant See Your Face in My Mind
10. When the Musics Over