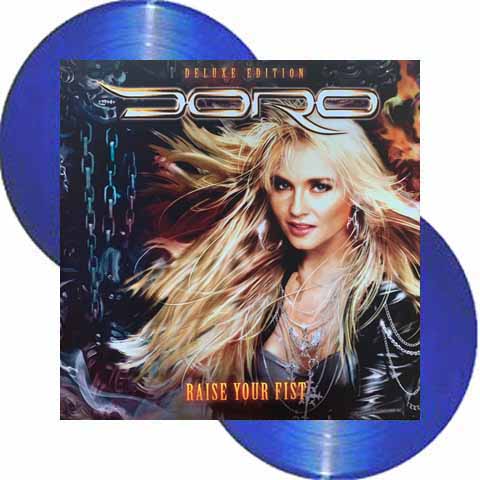 Doro’s 2012 album Raise Your Fist continues the success story of the Dusseldorf singers solo career. Take for example the title track of the album, that immediately encourages to rock along and bears the potential to replace All We Are as Doro’s trademark song. And also the energetic speedster Take No Prisoner as well as the double bass anthem Revenge have a similar impact on your desire for head banging. Coldhearted Lover and Rock Till Death brim over with arena rock appeal, while the sensitive and epic but at the same time powerful track It Still Hurts scores big time on an emotional level – not only because of the terrific duet with Motorhead’s Lemmy. The same applies to the German song Engel, which is preluded by magnificent dreamy piano/synthesizer sequences and that stages Doro’s expressional voice perfectly. Due to its swinging groove, Freiheit (Human Rights) adds a refreshing facet to the overall appearance of Raise Your Fist. The same is true for the slightly Kyuss-meets-Aerosmith-like Victory and for the concluding track Hero with its magical atmosphere and gloomy Black Sabbath flair – dedicated to the legendary Ronnie James Dio who sadly passed away two years ago and the first song that Doro wrote for this album. Not forgetting the stoically marching mid-tempo song Grab The Bulls By The Horns that features some licks by no less a figure than Ozzy Osbourne’s current guitarist Gus G. and underlines the high song writing level of the record perfectly. All in all: The incredible dynamism, compositional diversity (on this part, Doro worked again with US song writing genius Joey Balin, with whom she had composed songs for albums such as Triumph And Agony and Force Majeure among others) and the richness of detail make Raise Your Fist an album that can even satisfy the demands of the most demanding connoisseurs of music. All this makes Raise Your Fist Doro’s greatest work ever.