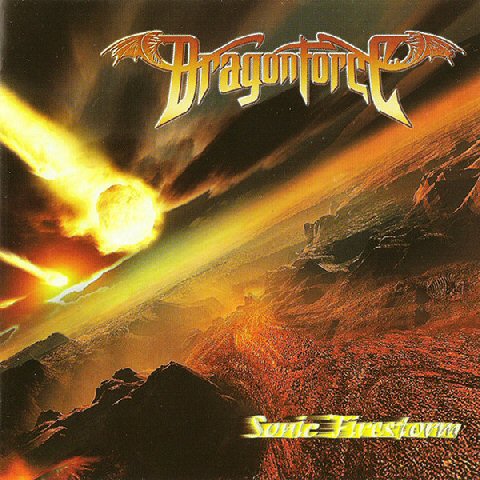 2010 re-release with one bonus track and bonus dvd

One term that is used quite a bit in jazz circles these days is “Young Lions,” which refers to young jazz musicians whose work is a throwback to the straight-ahead acoustic jazz of the ’40s, ’50s, and ’60s — a “Young Lion” might have started recording in the ’80s, ’90s, or 2000s, but stylistically, they are quite committed to the jazz of previous generations. And in heavy metal, a similar mentality exists in the power metal revival movement; the ’90s and early 2000s saw the rise of many young power metallers who look and sound like they belong in the ’70s or ’80s. England’s Dragonforce is a perfect example; although their second album, Sonic Firestorm, is a 2004 release, it might as well have been recorded in 1981. Just as the “Young Lions” of hard bop and post-bop reject fusion, crossover jazz and free jazz, Dragonforce is oblivious to alt-metal, rap-metal, death metal/black metal, metalcore, and other styles that have flourished in post-’80s metal. There are no chug-chug riffs or downtuned guitars on Sonic Firestorm, which happily recalls an era in which Iron Maiden, Queensrÿche, Manowar, King Diamond, and Savatage reigned supreme. Sonic Firestorm isn’t the least bit groundbreaking, and no one will ever accuse Dragonforce of being the most original or distinctive band in the metal field. Nonetheless, Dragonforce’s long-haired members are good at what they do — and what this CD lacks in originality, it usually makes up for in terms of passion, energy, and craftsmanship. Sonic Firestorm falls short of exceptional, but it’s a generally decent effort that is noteworthy if you still regard Queensrÿche’s Operation: Mindcrime and Maiden’s The Number of the Beast as essential listening.

Track listing:
1. My Spirit Will Go On
2. Fury of the Storm
3. Fields of Despair
4. Clawn over a New World
5. Above The Winter Moonlight
6. Soldiers of the Wasteland
7. Prepare for War
8. Once In a Lifetime
9. Cry Of The Brave