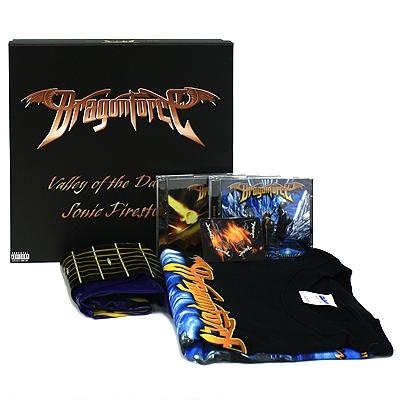 English 4 disc box set featuring an exclusive t-shirt, an inflatable guitar and a card of guitar picks. All this comes in a beautiful lp size box set. The two studio albums have been remixed and remastered

Valley Of The Damned 2003
The debut album from U.K. power metal giants Dragonforce is a polarizing affair. Valley of the Damned could be construed as a bloated, Spinal Tap-style tribute to early-’80s fantasy-metal, and in many ways it is; however, it’s so well played and so joyously executed that it could very well reignite the entire genre. For a band that collectively cites video game music as one of its major influences — the nine blistering tracks do, on occasion, conjure up images of greasy-haired teens huddled around a Commodore 64 playing King’s Quest — the multicultural sextet is a master of its craft. From the epic title track to the fist-pumping closer, “Heart of a Dragon,” the guitar pyrotechnics of Herman Li and Sam Totman light up the sky like a third world war, bending riffs into melodic submission while never overplaying. Vocalist ZP Theart has no qualms about emulating heroes like Bruce Dickinson (Iron Maiden) and Michael Kiske (Helloween), but his lupine howls have a character all their own. Dragonforce plays faster than most bands in the genre — this may be the first speed metal pop group — but the production is precision-tuned and never muddy, allowing the giant Slade and Andrew W.K.-style choruses the room they need to explode. Valley of the Damned may not be groundbreaking or cathartic, and lyrics like “In the land of desire with your heart filled with fire you live for the right to be free/We will sail on forever more to the land of the evening star” may cross the line into heavy metal parody, but it’s undeniably entertaining, expertly played, and endlessly fun.

Sonic Firestorm 2004
One term that is used quite a bit in jazz circles these days is “Young Lions,” which refers to young jazz musicians whose work is a throwback to the straight-ahead acoustic jazz of the ’40s, ’50s, and ’60s — a “Young Lion” might have started recording in the ’80s, ’90s, or 2000s, but stylistically, they are quite committed to the jazz of previous generations. And in heavy metal, a similar mentality exists in the power metal revival movement; the ’90s and early 2000s saw the rise of many young power metallers who look and sound like they belong in the ’70s or ’80s. England’s Dragonforce is a perfect example; although their second album, Sonic Firestorm, is a 2004 release, it might as well have been recorded in 1981. Just as the “Young Lions” of hard bop and post-bop reject fusion, crossover jazz and free jazz, Dragonforce is oblivious to alt-metal, rap-metal, death metal/black metal, metalcore, and other styles that have flourished in post-’80s metal. There are no chug-chug riffs or downtuned guitars on Sonic Firestorm, which happily recalls an era in which Iron Maiden, Queensrÿche, Manowar, King Diamond, and Savatage reigned supreme. Sonic Firestorm isn’t the least bit groundbreaking, and no one will ever accuse Dragonforce of being the most original or distinctive band in the metal field. Nonetheless, Dragonforce’s long-haired members are good at what they do — and what this CD lacks in originality, it usually makes up for in terms of passion, energy, and craftsmanship. Sonic Firestorm falls short of exceptional, but it’s a generally decent effort that is noteworthy if you still regard Queensrÿche’s Operation: Mindcrime and Maiden’s The Number of the Beast as essential listening.