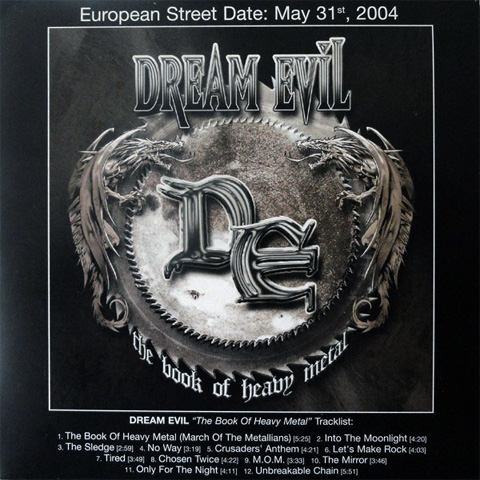 Dream Evil’s third album, Book of Heavy Metal, is a brazen tribute to this always controversial genre — as likely to invoke blind devotion from its fans as it does outright dismissal from its antagonists. In fact, Dream Evil, much like loin-clothed metal warriors Manowar, care not for the latter category of sniveling vermin! No sir, their mission to metalify (is that a word?) the realm is fueled by far grander ambitions and deeper commitments than those non-believers could possibly fathom. Or so one would gather from the meaty staccato riffs, dazzling guitar solos and soaring vocals (everything classic metal is known and loved for) to be found in über-metallic offerings such as “Into the Moonlight,” “Crusader’s Anthem,” and the over-the-top title track, which incidentally begins with vocalist Niklas Isfeldt’s piercing scream of: “metaaallll!” Noted metal producer Fredrik Nordström is the main architect of Dream Evil’s castle — a castle also embattled by bassist Peter Stalfors and legendary drummer Snowy Shaw (King Diamond, Notre Dame, etc.), but it’s Greek guitar-shredding sub-legend Gus G. (Mystic Prophecy, Firewind, etc.) who consistently shines through with his ever-explosive, but surprisingly restrained and well-timed leads here (and on album highlight “No Way” he pulls a few Zakk Wylde tricks, surprisingly enough). Also to their credit, Dream Evil doesn’t pave their glorious road with the easy but by now rote clichés of power metal. There’s virtually zero thrash-like speed to be found here, and many songs (“The Sledge,” “Let’s Make Rock” and “The Mirror,” in particular) actually come closest to old-school hard rock than later-day metal for inspiration. Throw in the mandatory power ballad (the decidedly syrupy “Unbreakable Chain”) and an absolute metal classic in the Accept mold named “M.O.M. (Man or a Mouse),” and you have the ingredients for a damn fine, pure metal album. In short, fans of Judas Priest, Dio, and especially Manowar will likely find themselves lapping up this seriously corny document, and the fact that the members of Dream Evil often have their tongues planted firmly in cheek should also forgive most of their excesses in the name of (deep breath now…) metaaaaallll!