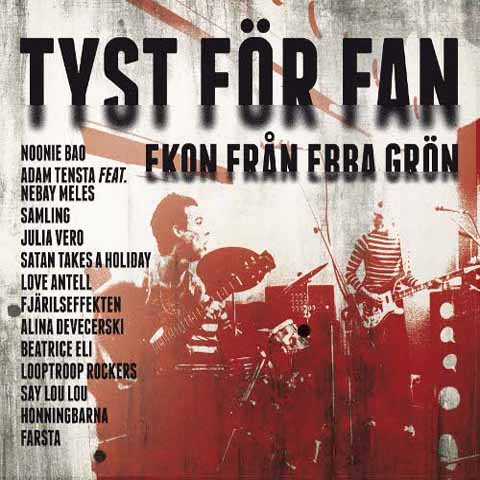 The name that appears to most people when the words Swedish punk are uttered is most likely Rågsveds heroes Ebba Grön. They account for a large part of Swedish music history, and therefore a bunch of modern artists wanted to give something back in the form of a tribute album. The artists participating on the Tyst För Fan tribute album are Adam Tensta with Nebay Meles, Say Lou Lou, Noonie Baoz, Farsta, Samling, Julia Vero, Satan Takes A Holiday, Love Antell, Fjärilseffekten, Alina Devecerski, Beatrice Eli, Looptroop Rockers and the Honningbarna. Anyone who has seen the Swedish TV show Så Mycket Bättre might get an idea of what you will have here. Most of the punk rage and guitar work has been removed, even though there are some that still do punk versions of their chosen Ebba track (Satan Takes A Holiday and the Norwegian punk act Honningbarna), and replaced it with sweeping, synthetic keyboards or commercial radio pop sound. Their is even an attempt to turn an Ebba Grön song into a modern rap track. Like most cover albums it features some tracks that works and others that fail big time because it doesnt even feel like they are made out of love for the originals. Beatrice Eli makes a charming version of Flyktsoda, Love Antell turns Scheisse into a grandiose ballad and Samling does a beautiful psalm-like interpretation of Beväpna Er. Unfortunately none of these will become radio hits like some tracks from that earlier mentioned TV show does. But this is an attempt to make a modern tribute album to Sweden’s perhaps best band ever.