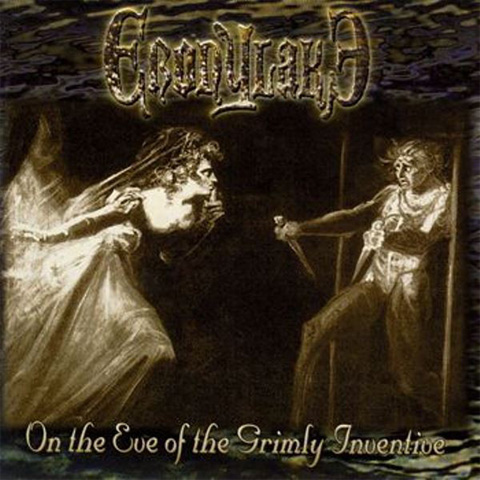 Ebonylake -On The Eve Of The Grimly Inventive cd [promo]

Reduced price due to name sticker on back cover

Being experimental in black metal can be a dangerous thing: it balances in the delicate position of being too underground for fans of experimental music whilst being too experimental for fans of the underground. How many experimental gems might have been lost in the shadow of more mundane bands like Marduk and Immortal? At least one: this one. EbonyLake’s first and only album ‘On The Eve Of The Grimly’ Inventive was released by the now defunct Cacophanous Records, more famous for giving Cradle of Filth and Dimmu Borgir amongst others their kickstart in the metal world. It is black metal played with all the fury, tempo shifts and technicality more common to mathcore, whilst being submerged in gothic ‘Victorian Horror’ atmospheres evoked through ghostly female wails, beautiful and sometimes discordant piano passages, and brilliantly conceived lyrics. Sounding quite unlike any other black metal album this is reminiscent of something like The End’s Within Dividia, and much to its advantage. This album still sounds fresh is a testament to its unique nature – compare, for example, Carpathian Forest’s Black Shining Leather or the aforementioned Immortal’s At the Heart of Winter, both of which were released in the same year and both of which sound dated to my ears, due in part to the amount of imitations that have followed in their wake.

Track list:
1. The Author Of The Burning Flock
2. The Wanderings Of Ophelia Through The Untamed Countryside
3. On The Eve Of The Grimly Inventive
4. Within Deepest Red (The Opening Of)
5. An Autumn To Cripple Children
6. A Voice In The Piano
7. The Music And Woe Between Horse Thieves