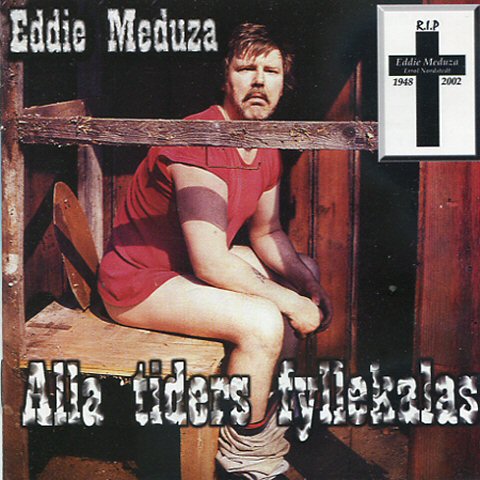 Errol Leonard Norstedt was born in 1948 and he changed his name to Eddie Meduza in 1977 and became the music journalists pain in the ass for more than 50 years before his death in 2002. His first single ‘Punkjavlar’ was released in 1978 with the 14 year old John Norum (Europe) on guitar. His first album ‘Eddie Meduza And The Roaring Cadillacs’ received badly reviews especially from Mats Olsson at Expressen who Eddie later dedicated his song ‘Mats Olsson Runkar Kuken’ to. His album ‘Gasen I Botten’ was released in 1981 and it sold more than 50 000 copies during the first years. One track ‘Mera Brannvin’ was played on Swedish radio something that ended with the radio being reported at the radio committee. His first tour was in 1982 and was a huge success. John Norum was his live guitarist and Norum wrote a track together with Meduza called ‘Boyazont’ that ended up on the first Europe album. Meduza was a cash machine during the 80s and he spent his well earned money on a home studio called ‘Studio Ronka’. During all his career he wrote a lot of tracks that weren’t suitable to be released on any albums due to the content of the lyrics. All this material was sold on cassette formats through his fan club. These tapes have been released on cd format between 1999 and 2005 on 16 volumes under the title ‘Alla Tiders Fyllekalas’. The last three in the series was completed by Meduzas son after his death. Volume 12 is other artists paying tribute to one of Swednes finest, the late and the great Eddie Meduza. This includes 7 monologues by Eddie Meduza and 10 tribute tracks