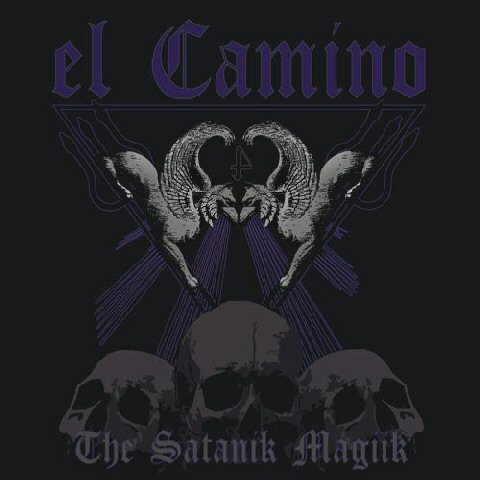 Somehow, it would be immensely unfair to lump Sweden’s El Camino close to Cali’s own kings of the suntan Fu Manchu. On the surface, there is more than one thing in common. Firstly; both bands specialize in what is dumbly known as stoner rock and secondly, both seem to worship a 70’s era that is looked upon through glassy eyes. Like Fu Manchu with their shameless and tiresome worship of beach culture, the mere mention of the moniker El Camino brings about images of moustachioed dudes sporting bandanas a la Bjorn Borg, shorts that are way too short and tiny ass skateboards with which the youth can clumsily careen through empty swimming pools. But we couldn’t be further from the truth. For all we know, this quintet’s choice of name may have nothing to do with American carmanship and might have a hell of a lot to do with Satan. As if The Satanik Magiik title wouldn’t be enough of a tip, it takes one track from this debut full-length to realize that El Camino could pretty much sacrifice the body of Scott Hill before 10 am only to then hit the closest slaughterhouse for brunch. Musically speaking, The Satanik Magiik ain’t much of a departure from the laid back stoner rock most of us have come to love. The main difference between this and them being the dark cloud that seems to hover over every single note. While the album transcurs in mid tempo space and while the degree of guitar chunkiness and fuzziness is precisely what every other stoner rocker has been feeding us for the past ten years, tracks like “Hail the Horns, ‘We Are the Dark”, and “Rise of the Snake” aren’t exactly of the jovial kind. It also helps that vocalist Daniel has the voice of a wild boar. The man at the mike sounds rough, like he’s lived in seclusion for the past decade and has just been released into society. He’s got a lot to say and regardless of his feelings, he sounds pissed. The label insists on classifying this band as a doom act, and since the difference between that and stoner rock can be murky, it ain’t much of a stretch. The truth is that some of these tracks boogie too much, they are closer to thick rock and roll than they are to anything that could spell some kind of bleak future. Plus they are played with certain gusto, a feeling prohibited to morose dudes who truly step up to the doom altar.

Track listing:
1. Prelude to the Horns
2. Hail the Horns
3. The Ritual – We are the Dark
4. Mountain Man
5. Rise of the Snake
6. Family Values
7. Satanik Magiik
8. Avra Kehdavra