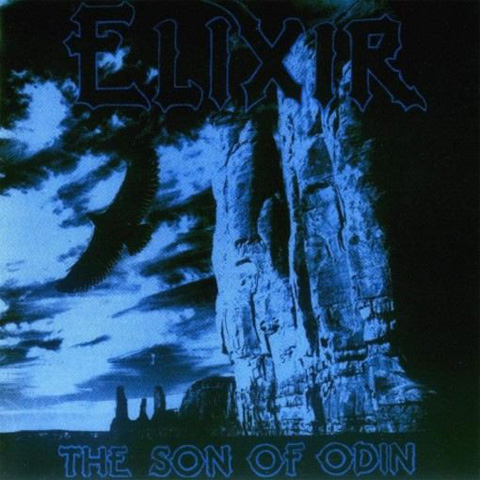 Elixir -The Son Of Odin cd

Elixir’s self-financed debut album, The Son Of Odin, was a fine example of the traditional and New Wave of British Heavy Metal values made popular during the early ’80s. The only problem was that the album was only released way after the fact, in 1986, by which time thrash and speed metal were ruling the roost, and the London five-piece’s creative devices had been rendered at best quaint, at worst archaic. To wit, energetic numbers such as “Hold High the Flame,” “Trial by Fire,” and “Treachery (Ride Like the Wind)” were the closest Elixir came to thrashing out, but only in a semi-convincing, probably purely accidental manner, akin to Anthrax’s still formative, Fistful of Metal era. Other than that, typical Elixir anthems like “The Star of Beshaan,” “Children of Tomorrow,” and “Dead Man’s Gold” were characterized by galloping riffs, twin guitar harmonies, and fantastical lyrics pointing to one overwhelming influence — you guessed it: Iron Maiden (also see the “Losfer Words”-like instrumental “Chariot of the Gods”). But neither their decidedly sub-Maiden songwriting abilities nor singer Paul Taylor’s comparatively less powerful and expressive vocal range could attain the same high-caliber results, never mind conjure the same epic scope of their heroes’ best work. Instead, listeners may find themselves reminded of less successful N.W.O.B.H.M. outfits like Blitzkrieg or Satan (both of them, incidentally, fronted by Taylor sound-alike Brian Ross). In any event, heavy metal purists are bound to hear enough worth praising about additional entries such as “Pandora’s Box,” “Starflight,” and the particularly strong, album-closing title track — all of which contain truly memorable choruses to go with their tried-and-true classic metal elements. In their time, however, Elixir’s first effort proved to have arrived a day too late — and, given their independent status, undoubtedly a dollar short — for garnering any commercial success.