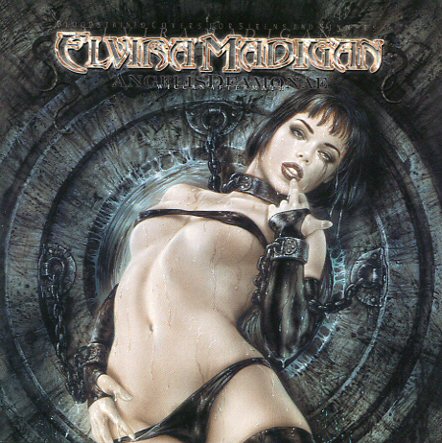 Not a band, not a woman, but a one-man performing, recording, art-designing, and album-releasing (on his very own Northlore label) operation, Elvira Madigan is the work of Stockholm, Sweden’s Marcus Hammarstrom, formerly the vocalist for Andalucia and bassist with Ethonicide. Gradually conceived during his stint with the aforementioned acts, Elvira Madigan became a reality in the year 2000 with the release of the conceptual Black Arts debut and its next-year follow-up, Witches — Salem (1692 vs. 2001). The music displayed a symphonic/progressive/black metal blend reminiscent, yet more eclectic even, than Dimmu Borgir and Cradle of Filth. It would take four relatively silent years for Hammarstrom to revisit Elvira Madigan, however, and when he did, it was with an album of covers called Angelis Deamonae — Wiccan Aftermath, containing radical reinventions of songs by everyone from the Scorpions to Maurice Jarre to Chris de Burgh to a pair of themes from the Final Fantasy video game. When I first bought an Elvira Madigan album it was due to the lovely Luis Royo cover artworks that are on all four releases. When I heard the first album the first time I really liked the music. Marcus vocals require an acquired taste, which many will not like. I cant say I liked it the first time but his raspy demon vocals grew on me and it really fits the music well. When I got the third album I couldnt tell it was a cover album besides the Scorpions track. The other tracks were unknown for me at the time while Scorpions track Alien Nation is the best track the band ever did since the Blackout album (nah .. I was never a When passion rules the game/Winds of change era fan). Alien Nation are among the heaviest tracks Scorpions ever did and its nice to see that someone out there decided to make a cover version of it (even though it doesnt beat the original). Videogames isnt my cup of tea but the instrumentals At Zanarkand and Jacobs Ladder are minor masterpieces as the power in Elvira Madigan albums are the music in itself. The music is melodic and symphonic, still yet with some harsh overtones and the gothic melancholic keyboard. Another first thought when I realized that I was holding a cover album in my hand was that who the hell decides to fill half of the album up with Chris DeBurgh covers. Anyway the first one Spanish Train features some clean vocals with came up as a surprise. The other three The Leader/The Vision/What About Me flows into each other to make it one long mind blowing musical journey. It didnt turn me into a Chris DeBurgh fan as I doubt DeBurgh can capture the heavenly mix between the guitar and keyboard in this track. It turned out to be one of the best tracks on the album. Elvira Madigan is so much more than just lovely cover artworks. Buy this one and find out for yourself. Highly recommended