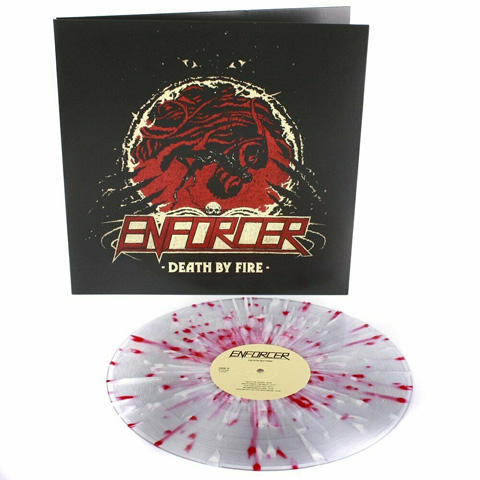 Enforcer are the leaders of the new generation metal bands genuine to the roots of real metal, whether we talk about spirit, the sound or honest appearance. A fist in the face of modern fake bands undeservedly popular in the mid 00s. The band was formed in 2004 in Arvika, a town in Sweden far away from everything. With the release of their debut album ‘Into The Night’ in late 2008, Enforcer created a record which bucked the trend of overproduced, clean plastic albums with tons of tracks and triggered drums. ‘Into The Night’ was a pure metal record, standing in the tradition of acts such as Exciter, Agent Steel and Anvil. Enforcer were heavily touring through Europe and the US – along with acts such as Portrait and Cauldron, plus performing at many festivals. With the extreme live energy and the overwhelming feedback in their mind, Enforcer wrote the follow up record ‘Diamonds’ in 2009, entering the studio by the end of the year with renown Swedish producer Rikard Lofgren. And indeed the five metal heads managed to top their iconic debut. ‘Diamonds’ delivered a heavy metal album the way it is intended to sound. After this album the band toured through Europe along with Airbourne and Bullet, followed by more festival appearances. The title to their third album, ‘Death By Fire’ refers to the most horrific ways to die, says vocalist and guitar player Olof Wikstrand. All lyrics on “Death By Fire” hold the same theme throughout the record: death – in all different shapes.” Once again, the album has less than 40 minutes of playing time – a trademark of Enforcer for a certain reason: “We write all music for the vinyl format and a normal lp can never be longer than 19 minutes on each side without losing sound quality. None of my favourite records are longer than 39 minutes anyway. It’s the perfect length both in that sense as well as keeping up an interest from the listener throughout the whole record. The record is made for listening to as an entirety and when it’s over the listener should be craving for more, not less. We don’t write any fillers. From a musical side, “Death By Fire” stands in the same direction as the previous two records, but even more focused, with strong melodies, outstanding riffs and a voice, which is strong as steel. Olof comments: “We decided to do the ultimate Enforcer record rather than trying to break new grounds. Take all elements that make us stand out from all other bands of today and exaggerate it 1000 times. Behold. Death By Fire

Track list:
1. Bells Of Hades
2. Death Rides This Night
3. Run For Your Life
4. Mesmerized By Fire
5. Take Me Out Of This Nightmare
6. Crystal Suite
7. Sacrificed
8. Silent Hour/The Conjugation
9. Satan