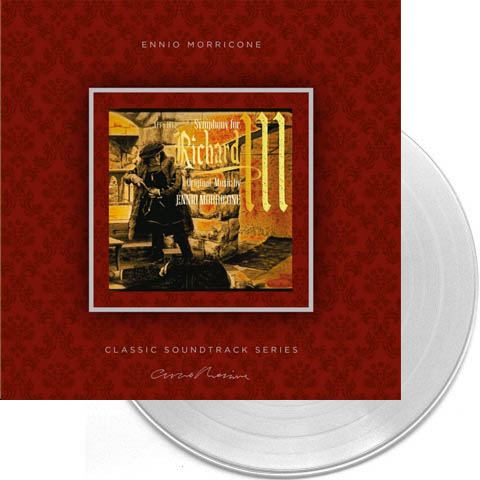 Richard III is a 55-minute film adaptation of Shakespeare’s play, starring Frederick Warde as the title character. The 1912 film, a French/U.S. international co-production, was produced by Film d’Art and released through the independent states rights film distribution system. It is the oldest surviving American feature-length film, and is also thought to be the first feature-length Shakespearean adaptation ever made. As early as 1922, the film was thought lost. It was not until 1996 that a print was discovered, when William Buffum, former projectionist at the Bluebird Theatre in Portland, Oregon, donated his copy to the American Film Institute. The AFI restored the print, transferring it from its nitrate film stock and retouching the hand tinting effect used in the original 1912 release. On June 26, 2001, Kino International released the film on DVD, with a newly composed score by Ennio Morricone, which was recorded at Music Village, Rome, Italy on July 17-19, 1997.

Track list:
1. Prologue
2. After The Battle
3. Lady Anne
4. The Court Of King Richard IV
5. The Journey To London
6. After The Coronation
7. Buckingham Leaves The Court
8. Battle And Death Of Richard III