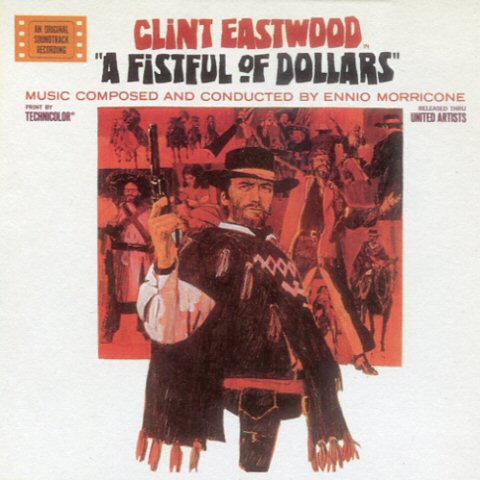 Rare out of print 2004 digipack press

Sergio Leone and Ennio Morricone define the spaghetti western style of film and music so squarely, the competition is barely considered. It was on the backs of films such as this 1967 smash, starring a pre-Dirty Harry Clint Eastwood, that their well-known reputation rests. The album is more than you expect. Of course, Morricone has that unique style that he and older, less Italian-influenced Western film composers made synonymous with the action from St. Louis to the Rockies, and the deserts from there to the coast. There are the clip-clop beats similar to the trot of horses, the weary harmonica trill, and the peculiar whistling, that puckered sound of aloneness that still makes one think of solitary battles against the self as much as mounted foes. But Morricone also loves rustic, romantic orchestrations that use his whole orchestra. When a trumpet hits a solo on “Theme From Fistful of Dollars,” backed by chilly strings and Spanish-strummed acoustic guitars, it’s one of Byronic, beautiful, spacious solitude. Cymbals crash over a piano’s bass keys, amidst rumbling trumpets and trombones, and the thump of timpani. Flutes and violins dart as much as thrust and parry, and background voices “Ahhh” in that everyman way, along with whip-cracks. It’s all pretty prairie, rolling hills, grasslands and cattle, wagon wheels, and unshaven men with uncertain life spans. It’s so mood-setting, you expect to see cactus or bison outside your door instead of an asphalt city. It’s instrumental music that’s a veritable co-star in a motion picture, not a pack of pre-recorded hit songs all wedged into a film like large square pegs into tiny round holes. This is authentic film scoring, and it is as alluring and inviting as Leone’s movie itself. You can see it just to hear this.