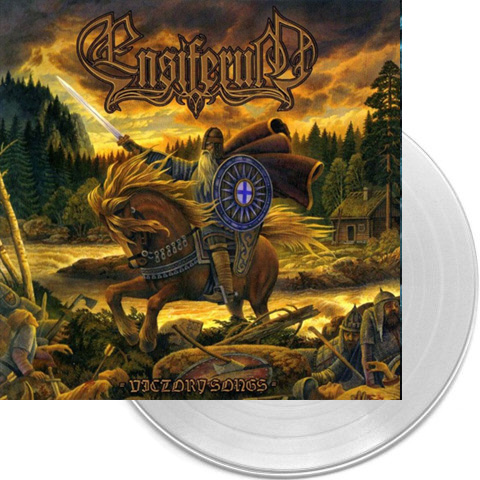 “Iron” was a great success and grew the band’s popularity to whole new heights. The album also got the band some extensive touring abroad, but these metallic recordings and gigs finally took such a toll on the band that the year 2004 saw three band members depart: drummer Oliver Fokin, bassist Jukka-Pekka Miettinen and vocalist Jari Mäenpää (later known for his work on Wintersun). This was not the end of the world for the kind of warriors that Ensiferum and its mastermind Markus are, they just took along new, excellent members to replace these sudden gaps in their lineup. Aboard stepped bassist / vocalist Sami Hinkka, drummer Janne Parviainen (also known for his work on Waltari and Barathrum), and vocalist / guitarist Petri Lindroos. In 2006 Ensiferum took their gear to Helsinki’s Sonic Pump Studios to record their third full-length album with producer Nino Laurenne (Thunderstone, Finntroll). And what an album they made! With metallic guitars combined to the traditional sounds of such instruments as the Finnish kantele, a bagpipe, nyckelharpa and bodhrans, the sound of “Victory songs” is a full, balanced mixture of folk, heavy and battle anthem-like power, complete with the gentle balance between Petri’s growling vocals and Markus’s and Sami’s harmonised choruses.

Track list
1. Ad Victoriam
2. Blood Is The Price Of Glory
3. Deathbringer From The Sky
4. Ahti
5. One More Magic Potion
6. Wanderer
7. Raised By The Sword
8. The New Dawn
9. Victory Song