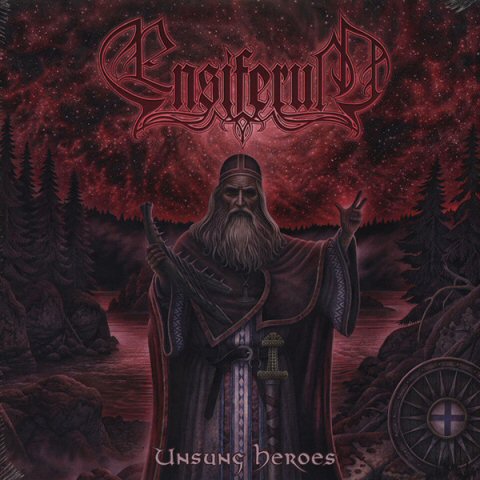 2020 release on double album on black vinyls with gatefold cover

The ascension or decline of any band is largely a question of degrees, particularly when either of the two occurring is so self-evident that a denial becomes dubiously contrarian. The latter eventuality can be a delicate matter as an overly hyperbolic reaction can deceive the reader unintentionally. This is relevant because barring a strong degree of loyalty without question, Ensiferum’s latest offering can be counting among many attempts at branching out and going a bit awry in the process and it is important to point out that this decline in quality that has resulted is an incremental one. It is so in relation to the last 2 albums, both of which struggled (more successfully in the case of “From Afar”) to rekindle the magic that was lost when Jari jumped from the dragon boat. To be fully forthcoming, the outward workings of “From Afar” did foreshadow a growing interest in symphonic sounds in addition to the assortment of folksy themes and period instruments, though said album brought these in as additives rather than replacing the high energy brilliance of “Iron” with a restrained character that bears a good deal of similarity to Luca Turilli’s “The Infinite Wonders Of Creation” and Judas Priest’s “Nostradamus”. This slower approach actually results in some fairly listenable, albeit inferior works in the cases of the title song and “Burning Leaves”, the latter of which served as a preview a few months prior to this album’s release as a single. The balladic elements are definitely pronounced, but they avoid completely ruling the roost. Unfortunately, a good amount of what comes along with moderately slow but still metallic anthems of the aforementioned variety is a fair amount of convoluted or somniferous meandering, taking on some elements of the ballad work heard out of Epica and the progressive semi-folksy ramblings of Tyr. The greatest offenders in the former category are “Celestial Bond” and “Star Queen (Celestial Bond Pt. 2)”, both of which put a good deal of emphasis on clean vocals and acoustic balladry, much more than the average fan of this band would expect or likely tolerate. In congress with the latter category is “Passion Power Proof”, which is all over the place and seems to be attempting to rope in a few stragglers from the Wuthering Heights camp, but fails at truly capture the energy that said band exudes even on their long winded numbers. Granted, this album isn’t a total wash and occasionally gets things into gear. The two shinning points of this otherwise faded affair are “In My Sword I Trust” and “Pohjola”, both of which are fairly mid-tempo by the standards of past work, but still manage to play up the glorious parts of the band’s arsenal and falls back on symphonic sounds only to bolster an already solid foundation. Petri’s harsh shouts have been de-emphasized a good bit to make room for a host of narrated passages, clean vocal choruses and bombastic instrumental sections, which would definitely explain a negative reaction in the band’s base at present. There is one little glimpse of high octane thrashing to be found in “Retribution Shall Be Mine”, a song that sounds like a b-side from “Victory Songs” and actually allows the band’s latent melodic death metal roots to shine through for a few minutes. The hard truth is, when a band spends 4 albums following a very consistent formula, and drastic changes will be met with either bewilderment or outright hostility. The author of this review doesn’t quite feel either of these, but there is definitely a strong decline in the former consistency that this band has been known for. This isn’t an issue of being over-produced or under-produced, nor is it one of a band losing its ability to get the job done on their instruments, but more one of allowing oneself to drift away from his roots like a wandering dryad leaving the forest for the open plains and being pretty well out of her element. This will probably sound better to those who like lighter listening folk outfits within Ensiferum’s ranks, but the rank and file who want a glory ride amid a charge of berserkers will definitely be disappointed.