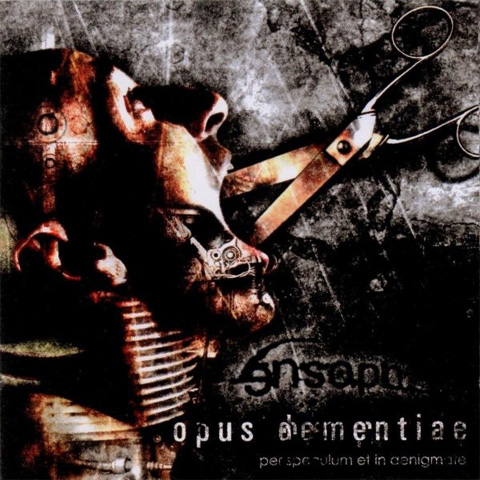 Ensoph’s Opus Dementiae is the musical equivalent of a David Lynch film. It’s disjointed, even confusing at times, and yet it repeatedly falls together in an enjoyably chaotic sort of way. Drawing from equal parts goth, doom, and black metal, with a little pinch of progressive rock and folk music thrown in for good measure, Opus Dementiae reminds me of a dream world. If you’ve ever had one of those dreams where you’re visiting with an old friend one minute, flying over your house the next, and talking to dolphins a few minutes later, you know exactly what I’m talking about. While you’re in that dream world, everything seems to make complete sense; it’s only afterwards when talking about it that it seems so strange. Ensoph’s album is exactly the same way. While listening to the album, it makes perfect sense how a track can go from goth to black metal and back several times. Unlike bands like System Of A Down and Mr. Bungle, the transition between musical styles is quick yet smooth, not abrupt. Considering the amount of musical styles jammed into each track, the songs flow well. Most of the tracks don’t have a discernable chorus — to have one, the band would have to repeat something they’ve already done before. Don’t get too attached to a particular riff or sound while listening to Opus Dementiae — just as the riffs begin to grow on you they’re yanked away and replaced by others just as quickly. This isn’t top 40 music by any stretch of the imagination. Think of it more as a musical voyage. Like that dream world, you’re never quite sure what’s going to come next. The arrangements are consistantly intelligent and creative. Ensoph have managed to break every musical mold I can think of. If you’re looking for something original and like My Dying Bride, Emperor, My Life with the Thrill Kill Kult and The Cure, then this is for you. With vocals ranging from hushed whispers to all-out black metal screaming, this probably isn’t a disc you’ll find yourself singing along to. Give it a spin though, and I guarantee you’ll be thinking along to it.