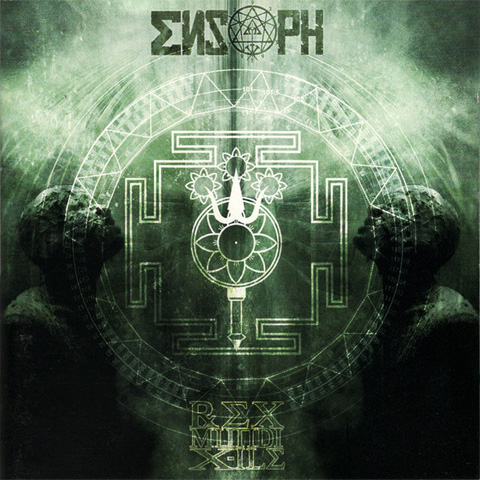 The Venice, Italy based Ensoph have been described as “avant-garde gothic metal,” but they don’t sound anything like Lacuna Coil and other gothic metal bands that have come out of Italy. Actually, Rex Mundi X-Ile is probably best described as futuristic alternative metal with elements of industrial, goth, EBM, black metal, and progressive metal. That is an intriguing variety of influences, and the intrigue factor is fairly high on this early 2009 release, which successfully contrasts the extreme and the melodic. Rex Mundi X-Ile has its brutal, abrasive moments, but overall, the disc is relatively musical — and Ensoph enjoy contrasting extreme vocals with clean vocals. The extreme vocals favor the type of harsh, abrasive rasp that reigns supreme in black metal, but without those rasp vocals, people probably wouldn’t think of black metal as being one of Ensoph’s influences on this 54-minute album (which is dominated by original material but also contains an interesting cover of Alice In Chains’ Would). And even with the inclusion of rasp vocals, no one will think that Ensoph sound like Dark Funeral or Emperor; the material is way too industrialized to be mistaken for black metal. That industrialization is a positive thing — at least if one has a taste for industrial rock and EBM and appreciates the rhythmic quality that Nine Inch Nails, Ministry, KMFDM, and Rob Zombie have favored. Although Ensoph have been around the Italian metal scene since the late 1990s, they aren’t well known anywhere else but Rex Mundi X-Ile has a lot going for it and indicates that these Venetian alt metallers are well worth getting to know.