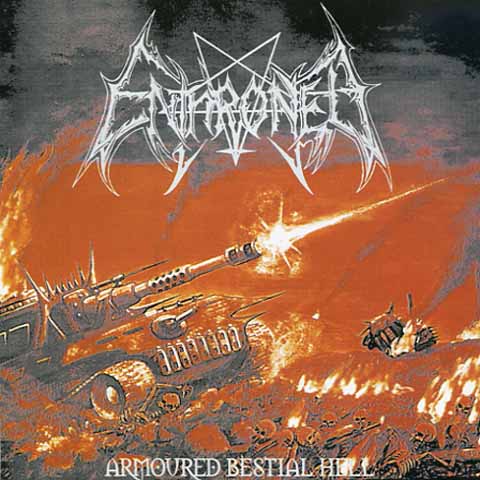 Enthroned never missed an album in their career till the great ‘The Apocalypse Manifesto’, but with this one they had a decline. Anyway I don’t consider this one a totally bad album. Surely this is their worst one. Try to forget the hellish production of the previous one, the songwriting of their first two masterpieces, or the good lead guitar work, a trademark in their sound. Let me say that the violence is always present and rooted in their sound but for example in ‘Wrapped By Fire’ is a violence that leads nowhere in terms of songwriting and creativity. The rhythm guitars have been already heard several times and in a better way in other albums. The lead guitars have less creativity too. The production is quite raw compared to ‘The Apocalypse Manifesto’ and a bit bad for the drum work, always a bit hidden behind the loud guitars. This is an album very well composed, executed and produced, blasphemous Black Metal with strong vocals and lots of aggression but it feel lifeless and soulless compared to their earlier work. In the past Enthroned used to come up with great albums (‘Prophecies Of Pagan Fire’ and ‘Towards The Skullthrone Of Satan’), which were filled with a dark, sinister and obscure atmosphere and likely emotions, the result of intense and tight songs. ‘Armoured Bestial Hell’ aren’t bad but when its measured with the old stuff then its just passes by without being that exiting