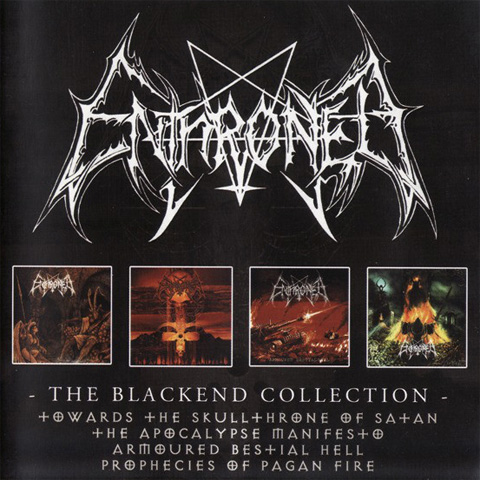 Towards The Skullthrone Of Satan 1997
Enthroned have made a masterpiece with their second album. The black metal epic is a lucid description of how black metal should sound; evil, praising the elector of darkness and feeding on blood, death, and fire. Cronos from Venom are doing guest vocals on the track ‘Satans Realm’. Cronos liked them and im sure even Satan has this one in his collection so if one truly enjoy’s Black Metal one should own this album without thinking twice.

The Apocalypse Manifesto 1999
The Apocalypse Manifesto marks a quite big change by Enthroned. The predecessor, that great Towards The Skullthrone Of Satan, was evil but raw as fuck and now, finally we have a better production that exalts the great drums work and the always excellent guitars lines. All, in this entire album is different from the others before for a better production and I believe, an higher level of brutality. The title track, after a short intro, is unbelievable for malevolence in the rhythmic guitars sounds and we can always found epic, satanic, obscure melodies in the long notes by the lead guitars to give even a more desecrating touch. “Death Faceless Chaos” is total blast beats until 2:17 where there are some epic passages with the bass drum in the first line. Really, this is the Enthroned album where you can breathe the most obscure stenches ever: brimstone and hell. The atmosphere is truly apocalyptic and for this check out the riff at the beginning to “Retribution Of The Holy Trinity” or the great, majestic riff at 2:20…one of the greatest things Enthroned ever did. It’s impossible to remain indifferent in front of such violence. The attack of “Genocide” is superb with plenty of blast beats and distorted, fast solos and following stops where the band’s skills towards dark melodies arise in a mess of hellish fires. In this case “Volkermord, Der Antigott” is great, featuring one of the most screamed performances by Peter Tagtgren (from Hypocrisy/Pain as special guest) at the beginning, with his classic scream-whistle. The pure death metal influences can be found in the first part of “Alasor Rex Perpetuus Doloris” that features inhuman vocals and great blast beats always mixed with evil lead riffage and great atmosphere. The epic, awesome “The Scourge Of God” ends an album that surely doesn’t feature filler songs or mediocre songwriting. Another great album by Enthroned.

Armoured Bestial Hell 2001
Enthroned never missed an album in their career till the great ‘The Apocalypse Manifesto’, but with this one they had a decline. Anyway I don’t consider this one a totally bad album. Surely this is their worst one. Try to forget the hellish production of the previous one, the songwriting of their first two masterpieces, or the good lead guitar work, a trademark in their sound. Let me say that the violence is always present and rooted in their sound but for example in ‘Wrapped By Fire’ is a violence that leads nowhere in terms of songwriting and creativity. The rhythm guitars have been already heard several times and in a better way in other albums. The lead guitars have less creativity too. The production is quite raw compared to ‘The Apocalypse Manifesto’ and a bit bad for the drum work, always a bit hidden behind the loud guitars. This is an album very well composed, executed and produced, blasphemous Black Metal with strong vocals and lots of aggression but it feel lifeless and soulless compared to their earlier work. In the past Enthroned used to come up with great albums (‘Prophecies Of Pagan Fire’ and ‘Towards The Skullthrone Of Satan’), which were filled with a dark, sinister and obscure atmosphere and likely emotions, the result of intense and tight songs. ‘Armoured Bestial Hell’ aren’t bad but when its measured with the old stuff then its just passes by without being that exiting.

Prophecies Of Pagan Fire 1995
Prophecies Of Pagan Fire doesn’t attack you with itself, but waits for your attention. However, it holds many secrets in itself, many things that you wouldn’t think of. Although it starts comparably to the other play-as-fast-as-you-can-and-praise-satan black metal bands, it changes quickly to a great, atmospheric work that shows a very interesting, though not really innovatory side of black metal.

Disc 4: Prophecies Of Pagan Fire 1995
1. Prophecies Of Pagan Fire
2. Deny The Holy Book Of Lies
3. Under The Holocaust
4. Scared By Darkwinds
5. Tales From A Blackened Horde
6. At Dawn Of A Funeral Winter
7. Rites Of The Northern Fullmoon
8. Skjeldenland
9. At The Sound Of The Millennium Black Bells
10. As The Wolves Howl Again