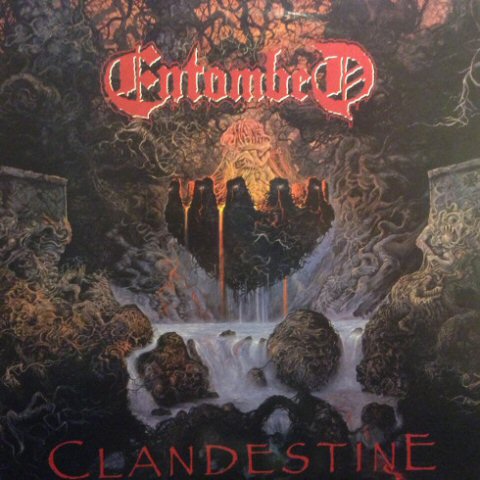 Entombed’s second album, Clandestine, is cut from the same cloth as its predecessor, the epochal Left Hand Path (1990). Released during the formative period of death metal — that is, the early ’90s, when American bands like Obituary, British bands like Carcass, and Swedish bands like Entombed were all flourishing creatively thanks to supportive labels like Earache and a multiplying international fan base — both Left Hand Path and Clandestine set the stage for successive generations of death-rooted Scandinavian metal bands. Entombed’s most distinguishing characteristics during period, their buzzsaw guitar riffs and varied tempos, are showcased well on Clandestine. The intertwined dual-guitar assault of Uffe Cederlund and Alex Hellid is downright brutal; the intermittent lead guitar breaks do serve as brief moments of respite, granted, though their tone of eeriness is more foreboding than it is actually relieving. The two singles released from Clandestine (“Crawl” and “Stranger Aeons”) are indeed the standouts, boasting monster riffs that are perhaps the most memorable moments of the album. Despite the similarity between Left Hand Path and Clandestine, there is a couple key differences. For one, vocalist Lars-Göran Petrov is missing in action here, though, to be fair, he’s not necessarily missed. That’s because drummer/songwriter Nicke Andersson takes over for him, and does such an impressive job, it’s easy to mistake him for a full-time death-growler. In fact, the liner notes of Clandestine falsely credit Johnny Dordevic for vocals (technically, he was a member of the band at the time of the album’s release, just not at the time of the album’s recording sessions). Secondly, the production of Clandestine — always a crucial aspect of music this overpowering — is a notch or two better than that of Left Hand Path. Tomas Skogsberg produced both albums, as he did all of Entombed’s early recordings, but he got a more cutting sound this go-round, with the guitars particularly standing out, along with the multi-tracked vocals. Too, the songwriting here is more distinctive than on Left Hand Path, which was comprised largely of reworked Nihilist (i.e., the band’s pre-Entombed moniker) material. Everything considered, Clandestine might be a better album than Left Hand Path — for sure, some fans favor it — if not as historically significant nor as raw-sounding as that monumental debut.