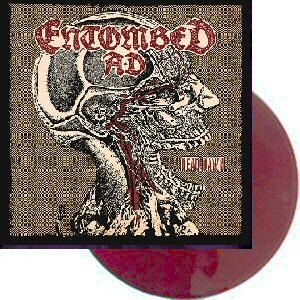 Purple vinyl edition with gatefold cover. The purple vinyl version was made in Germany but only sold at the American market. Limited 200 copies

If you don’t know Entombed A.D., the deadly sonic force fronted by former Nihilist/Entombed vocalist L-G Petrov, well, then you’re either no metalhead, slept under a rock since the late 80s or have already gone the way of all flesh with crawling swarms of maggots deliciously peeling every single bit of meat from your sorry bones. L-G was part of such classics as Left Hand Path or Wolverine Blues and apart from that classic guitar sound pivotal in forging the cult status of Entombed. Compared to Back To The Front in 2014, Dead Dawn sounds way more aggressive, focused and apart from striking artwork by Watain’s Erik Danielsson impresses with the classy death metallic opening riff of Midas In Reverse, the powerful groove of the title track or Silent Assassin, the beyond cool Randy-Rhoads-tribute-riff and morbid twist of The Winner Has Lost, the full-frontal-Autopsy-like assault of Black Survival as well as the sickened ballad Hubris Fall, which reminds of Entombed’s ingenious Roky Erickson cover, Night Of The Vampire. Great songs, a great sound and the right attitude make Dead Dawn a damn great album and L-G’s sums it up perfectly on the driving Total Death: It’s only rock’n’roll – Destruction!