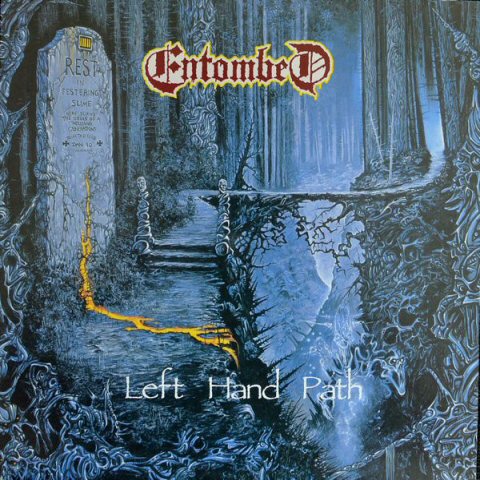 With their monumental debut album, Left Hand Path, Entombed crashed through the gates of the international death metal scene and foreshadowed the pivotal role that Scandinavia would soon play in the evolution of the then-burgeoning genre. These Swedes had earlier made ripples throughout the underground with their But Life Goes On demo (1989), as well as their prior demos as Nihilist, which had gotten them signed to Earache. Left Hand Path did more than make ripples upon its 1990 release, however — it came crashing like a tidal wave. Beyond doubt it raised the bar for death metal, significantly challenging American trailblazers like Death, Obituary, and Morbid Angel. What Entombed did was take the extremity of Earache’s stable of British grindcore bands (Napalm Death, Carcass, and Godflesh) and apply it to the elaborate songwriting structures of the aforementioned American death metal bands. It was the best of both worlds — over the top extremity complemented by intricate songwriting — and it wasn’t more than a year or two later that everyone and their brother were following Entombed’s lead (e.g., Carcass’ Necroticism [1991], Napalm Death’s Harmony Corruption [1990]). But no one did it quite as well as Entombed does here on Left Hand Path; in fact, even the band itself struggled to follow up this album and quickly moved on stylistically. As for the album itself, few of the songs stand apart from one another, apart from the epic title track, which opens the album and is highlighted by an eerie, unforgettable ambient break; rather, the album plays like a 40-minute wall of sound, one that is downright relentless. The band grinds away on song after song as monstrous vocalist Lars-Göran Petrov growls away like a caged, dying beast. The songs are fairly complex — they’re only a few minutes long, granted, but they don’t follow clear-cut patterns and are interwoven with numerous guitar solos, which particularly set Entombed apart from the grindcore bands of the time. The band’s dual-guitar attack allows for heavy soloing without ever forsaking the nonstop riffing, and everything — from the guitars to the vocals — sounds slightly overdriven, to the extent that the instruments blur into a swirling tide of noise yet remain slightly distinct. By the time you reach the end, you have to let out a big sigh — it’s surely not an album you want to end, but then again, the finale does admittedly come as a calming relief. As aforementioned, Left Hand Path is a monumental accomplishment, not only for Entombed but for death metal in general. The band would go on to record many more fine albums, but none would be quite as epochal and seminal as this one.