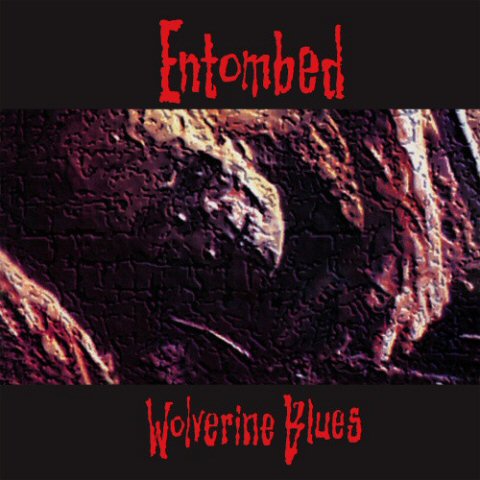 Entombed, one of the premier death metal bands of the early ’90s, boldly ventured into new musical territory with Wolverine Blues, the band’s third excellent album in a row. Wolverine Blues is such a departure from past efforts, in fact, it’s debatable whether this music even qualifies as death metal, given its standard rock characteristics: comprehensible vocals, steady tempos, and verse-chorus-verse songwriting. None of these characteristics is associated with death metal, and indeed, purists might perceive Entombed’s development on Wolverine Blues as an abandonment of the very principles that won the band such underground acclaim in the first place. Some purists might even go so far as to consider the album a sellout. Most reasonable listeners, however — including even the most impassioned death metal purists — will likely find much to appreciate on Wolverine Blues. It’s that impressive. For sure, Entombed’s previous albums, Left Hand Path (1990) and Clandestine (1991), were excellent, among the finest death metal efforts of their time, but their stylistic trappings were well evident. The growled vocals, breakneck tempo shifts, and amorphous song structures, to cite a few key characteristics, were fairly inaccessible to the type of mainstream metal listener who would consider Metallica or Pantera extreme. Wolverine Blues, on the other hand, is that rare album brutal enough for the death metal crowd yet at the same time accessible enough for the metal mainstream. For instance, the vocals of Lars-Göran Petrov are mostly comprehensible; however, they’re delivered with such ferocity, they’re as powerful as, if not more so than, the most guttural death-growl. Likewise, the guitars of Uffe Cederlund and Alex Hellid riff along at a steady tempo, but they’re so heavy, they cut like a buzzsaw (as on “Heavens Die”) and pummel away like a jackhammer (“Demon”). Along with the drumming of Nicke Andersson, which is hard-hitting yet never to the point of blastbeat, it’s the songwriting of Wolverine Blues that is most removed from the confines of death metal. These are especially distinctive songs by Entombed, every single one each unique in its own way and graced with a memorable hook, particularly the album standouts “Wolverine Blues,” “Hollowman,” and “Out of Hand.” Clearly, a lot can be made of Entombed’s bold venture into new musical territory with Wolverine Blues, and you can bet metalheads will debate the album’s stylistic merits for years to come. What’s beyond argument, though, is that Wolverine Blues is the third impressive effort in a row by one of the best metal bands of the early ’90s, and as impressive as the past two albums were, this one is by far the most inviting and most deserving of widespread recognition.