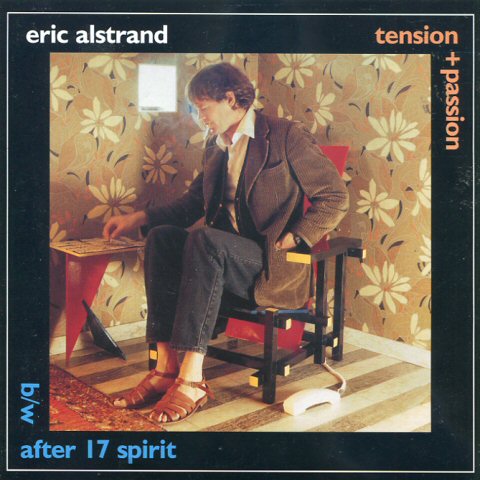 With handwritten note from Eric

One of those rare local produced singles that raises some questions. Eric Alstrand from Luleå released this two track single in 1987 on the local Open Record label. Trying to find some information about Alstrand or the label Open Records aren’t the easiest. If you look at the musicians and producer that has been involved, in the recording of Alstrands first solo work, some names stands out. The musicians involved were Lazze Nordan, Björn and Maria Erixon, Lasse Eriksson, Tommy Skotte and Urban Nilsson. The two last names are the ones that makes you raise your eyebrows as they were quite active Luleå musicians. Tommy Skotte’s most sought after work is the 1975 psych/prog album Svart Mjölk with Spilled Mjök. Svart Mjölk was a privately released album on the band’s own label. The band members of Spilled Mjölk were pupils of Kalix Folkhögskola where the album was primitively recorded during a week in May 1975, but Spilled Mjölk was founded in Luleå by multi-instrumentalists Tommy Skotte and Erik Ahlstrand (could this be the same person as Eric Alstrand). The Svart Mjölk album was made in a such a small amount and had no distribution other than the ones that Ahlstrand himself distributed. Spilld Mjölk’s violinist and singer Lars Frykholm was also a member of the huge Luleå based rock band Anton Swedbergs Swängjäng (all in all they had 37 members, one of them being Urban Nilsson that plays on this Alstrand single). Tommy Skotte later became the main man of Skottes Musikorkester who released two 45’s in the late 70’s (one of them being the Antikärnkraftsverk split single with Thomas Wiehe) and he played on Tomas Forsell’s from Skottes Musikorkester’s solo material. Ulf Nilsson, as mentioned, were involved with Anton Swedbergs Swängjäng but he also played on Tomas Forssell solo material with Tommy Skotte but the most productive of his past bands were Luleå based Rekyl, were Tommy Skotte turned up as a technician on the 1979 album; I Himlen Är Det För Sent. Erik Ahlstrand can also be found in the local 76 minute movie Karneval made by Torbjörn Säfve in 1984. When Alstrand sent his Tension+Passion single to the local Norrbotten Kuriren, for a review, it featured only a short hand written note saying (in Swedish) “Hi Roffe, I hope you put up with listening through both sides. Best wishes Eric”. Roffe in this case was Rolf Nilsson who was the music and movie reporter at Norrbottens Kuriren up to the early 90s. The short note feels quite personal which makes you think that Alstrand knew Nilsson or that Alstrand himself were part of the local music history to that degree that Nilsson very much knew who he was. There is another single, recorded in Umeå, that was released in 1988 by Alstrand called Turning point. Is this the same Eric Alstrand? And is Erik Ahlstrand and Eric Alstrand the same person? Who ran Open Records in Luleå and did this label ever released anything else? The questions are many and im sure there are people out there with lots of information. Anyone willing to share their information are welcome to send me an email. What i do know however is that this two track single is far from the psychedelic music of Spilld Mjölk and it doesn’t sound anything like the 70s prog rock that Tommy Skotte and Urban Nilsson were involved with in their past bands. This single features lots of synth and programming work made by Alstrand and the end result is some new wave / synth inspired music probably influenced by the music popular at the time.