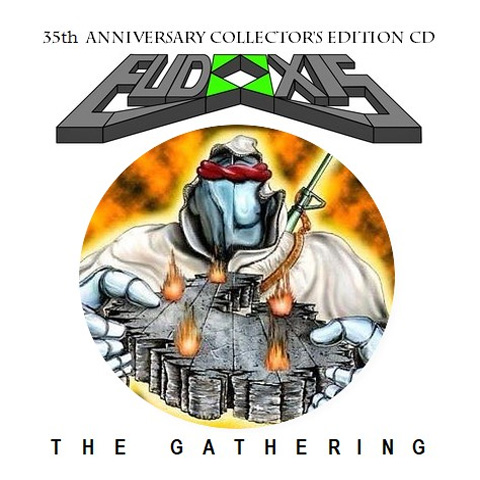 Eudoxis were one of the first thrash acts in Canada. The first incarnation of Eudoxis came to life in 1983 in Longeuil, a suburb of the Franco-Canadian city Montreal. The Judas Priest song Exciter had been their blueprint for songwriting and the result was way more aggressive than the british rockers themselves. In 1986, the 12“-single Attack From Above was released and has since become a searched gem. After some line-up changes, the band started recordings for the full length album Open Fire and it was released in 1991. On board was the band leader Rick Raczko, vocalist Sotiri Papafylis, drummer J.P. Perrault and axemen Mario Gilles Vaillancourt and Mars B. Alexander. This line-up gave the seven new songs a very distinct and original sound. Open Fire has also become a collector’s item over the years. To commemorate 35 years since the formation of Eudoxis, the band members have decided to re-release all of their old material. The Gathering is a compilation of the complete Eudoxis recordings along with two new songs by the band Screen which features 4 of the 5 members of the Open Fire line-up. What you get is one of the most original thrash acts from Canada. Thrash yourself the old-school way