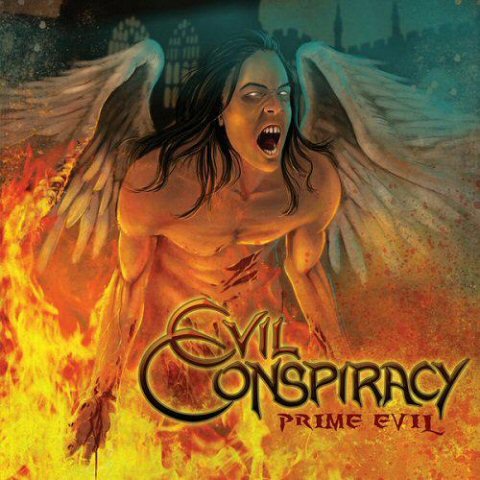 Long time customers of us might remember Evil Conspiracy from Kumla, Sweden. A band which demo releases we have been carrying since their beginning back in 2002. 12 years later, and with a handful of demos released during these years, the first full length album finally appears, and to be real honest i have never heard the band sound this good. There were never a question of the bands capability performance wise and now with a present line-up of members from Arsenite, Chain Of Hate and Memory Garden youll know there arent a bunch of new kids on the block (digging further into the albums recording process and you’ll find Sonny Larsson of Motherlode and Niklas Stalvind from Wolf on backing vocals). This is heavy metal with thrash metal influences. Musically you can think of Iced Earth, Morgana Lefay or mid period Megadeth, but as i said, this is musically as you wont find such a unique voice as Morgana Lefays Charles Rytkonen and not many will be able to copy Matt Barlow nor does the new vocalist, Fredrik Eriksson, mumbles the words as our beloved Dave Mustaine. No, he sings and does it real damn good. For most people this will be a new voice but i still remember back in 2005 when the track Lucifer Reincarnated from Chain Of Hate’s only demo were on my mixed disc in the car. A damn good track and a fine singer already back then. I have seen this band live a couple of times and i remember seeing them when they played support act to Nocturnal Rites and at that time they had Memory Garden singer Stefan Berglund behind the microphone. I thought then that this probably were the right time for the band to put down their debut album, but now when its out im glad they waited a few more years as this time all pieces of the puzzle comes together. I honestly cant see why no metal fan shouldn’t find something to like about this disc. It offers a lot as it ranges from classic and old school power metal to thrash metal. This is not a band that were founded to create something new but to take the best parts of the wide range of metal the genre offers and release a strong, enjoyable and highly recommended album. Hopefully Prime Evil will be an album talked about in major music magazines as it proves that Evil Conspiracy now is a serious force to be reckon with, we will for sure continue to keep our eyes and ears open for further material. Check it out