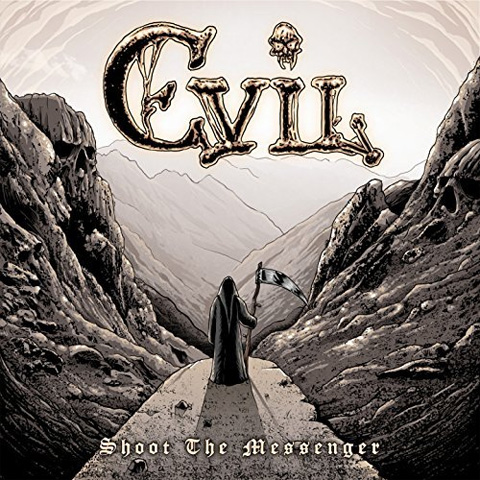 Anyone still remember Evil’s Message, the mini-album from Denmark’s Evil, released back in 1984 on the classic Rave-On Records? I am sure that at least some of you old farts remember coming across that particular record when it was released. That’s the only official release they ever recorded before going underground for three decades. Who would have guessed that Evil would be among us once again. Shoot The Messenger was completely recorded by the band’s original drummer Freddie Wolf (drums, guitars and bass) with vocals done by ex-Artillery shouter Soren Nico Adamsen. The question then is how does Evil sound in 2015? Well, pretty good if you like straightforward Metal à la Accept but then again, I cannot help feeling like something is missing from this record. Freddie has undoubtedly done his very best with the songs for this album by trying to handle everything himself (except vocals) but it really does not sound like a full band effort. There are some good ideas here and there on Shoot The Messenger but those ideas haven’t been carried out as well as they could have been, in my opinion, not a way that would make this album one of my favorite releases of 2015. Vocalist Soren sounds as good as always though. Evil’s melodic, straightforward and modern metal has its moments but compared to the classic Evil’s Message mini-album, this is sort of a letdown. I was hoping and wishing for a bit more than I got.