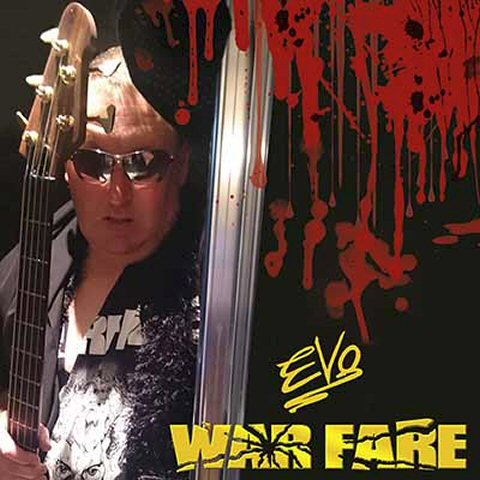 Following the mini-album “Damned Unto Death”, a collaboration between Evo (headmaster of metal punk crossover merchants Warfare) and Algy Ward (leader of the original Tank as well as temporary member of punk legends The Damned and The Saints), Evo returns with a full-length 11-track album entitled “Warfare”. The title of the album refers to the legendary band he formed in 1984 – along with The Blood and Merseyside’s Mayhem one of the first true blue British metal punk crossover outfits in music history! “It’s Warfare 25 years on, I know fans have waited a long time but this will never disappoint,” comments Evo on the record (he’s playing bass, guitar, drums, keyboards and sings on it). “Imagine the first four Warfare albums with today’s production, very deep lyrics and riffs made of extreme filth and Marshall power. Anarchy at its finest! I have come back after 25 years to kick your teeth out, what does that tell you?” Although Evo has played all instruments on the album himself, a few guest musicians have helped the maestro. Lips of Anvil is one of them: “Lips is a very underrated guitarist (fuck Eddie Van Halen and Ritchie Blackmore), he plays like he is on fire on a song called ‘This Man Bleeds Hate’. Lips played live with me in the studio at Newcastle when Anvil came to town.” Fast Eddie Clarke of Motörhead fame is an old mate of the almighty Evo as well: “Ed plays on ‘Misanthropy’, which is probably the heaviest stuff he’s played on since back in the Motörhead days, it’s sounding like ‘Bomber’ meeting ‘Electric Mayhem’ in a sewer with more power! Listen at your peril. Ed is probably one of the best guitarists in the world!” Then there is Nik Turner (nicknamed “Brainstorm”) of Hawkwind fame, one of Evo’s own heroes: “Brainstorm is a favourite back when I was still at school. I just phoned him up, told him about the project asked him to guest and he said yes, it would be a pleasure”. Finally there is Fred Purser, associated with the Tygers Of Pan Tang in the very early days, Evo has never been a huge fan of the NWOBHM but finds some kind words for Mister Purser: “He can play real heavy shit also.“ “Original, strange, manic, filthy, dark, powerful, ear bleeding mayhem”, is how Evo describes his first solo effort. He claims not to listen to any other (rock) music apart from his own nowadays: “I only listen to my heart, so mind your own fucking business!” Critics did give “Damned Unto Death” a pretty hard time, but in true punk fashion the man Evo could not care less: “The mini-album was never supposed to be Warfare or Tank. People didn’t get that both myself and Algy were just jamming, but hey, fuck the thick bastards!”